Ouch that sucks. I hate hearing stories like that. At least no one was injured

a friend of mine just got the first new bronco in my home town. I had to sneak a pic with my classic. the weather was so nice this weekend I took the bronco for a pretty long shakedown cruise. the first time I have had a chance to drive it since the ujoint debacle. it seemed to handle just fine. no weird noises or anything. looking forward to putting some miles on it this summer.

I had been thinking about putting a stripe kit on the bronco and I wasn't really sure if I wanted to or not, then I saw this special decor stripe which was common on the original bronco. i never really liked it that much but I saw it on a sema bronco and it looked really good, so I decided that with the color of my bronco, my wheels, and other badges as well as the fact I put the silver ford lettering on the tailgate that silver would look good. so I ordered the stripes. I vacillated a few days before biting the bullet and putting them on, but I really like the way it turned out. I liked it before, but it looks even better now I think.

a couple in progress pics 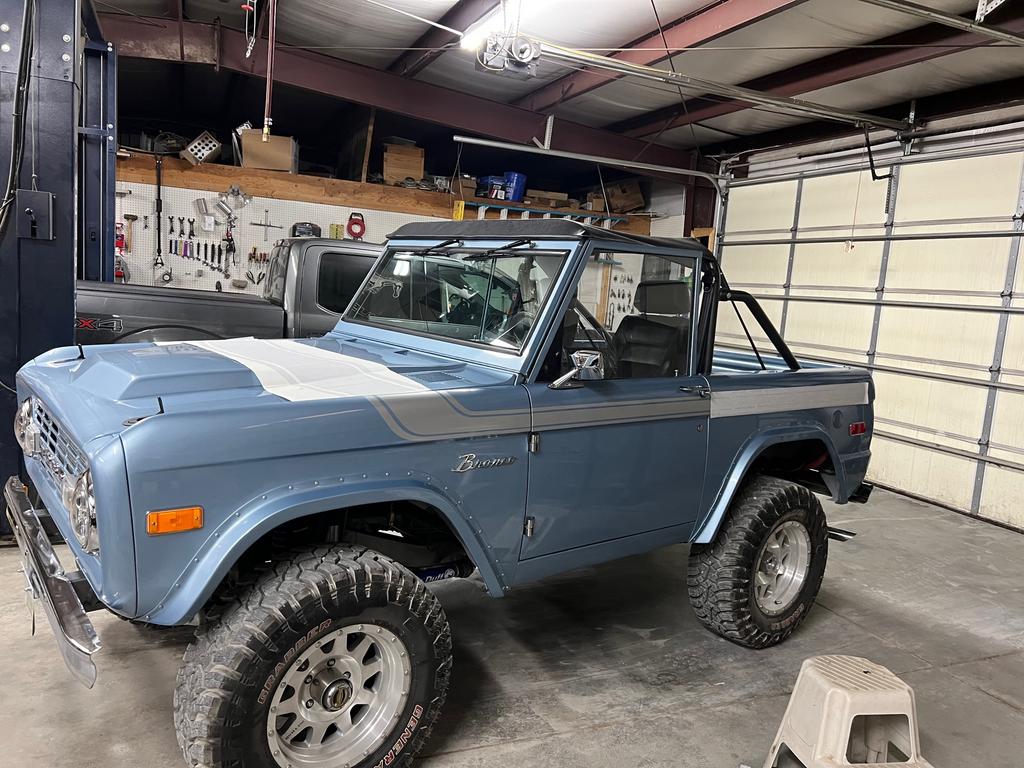 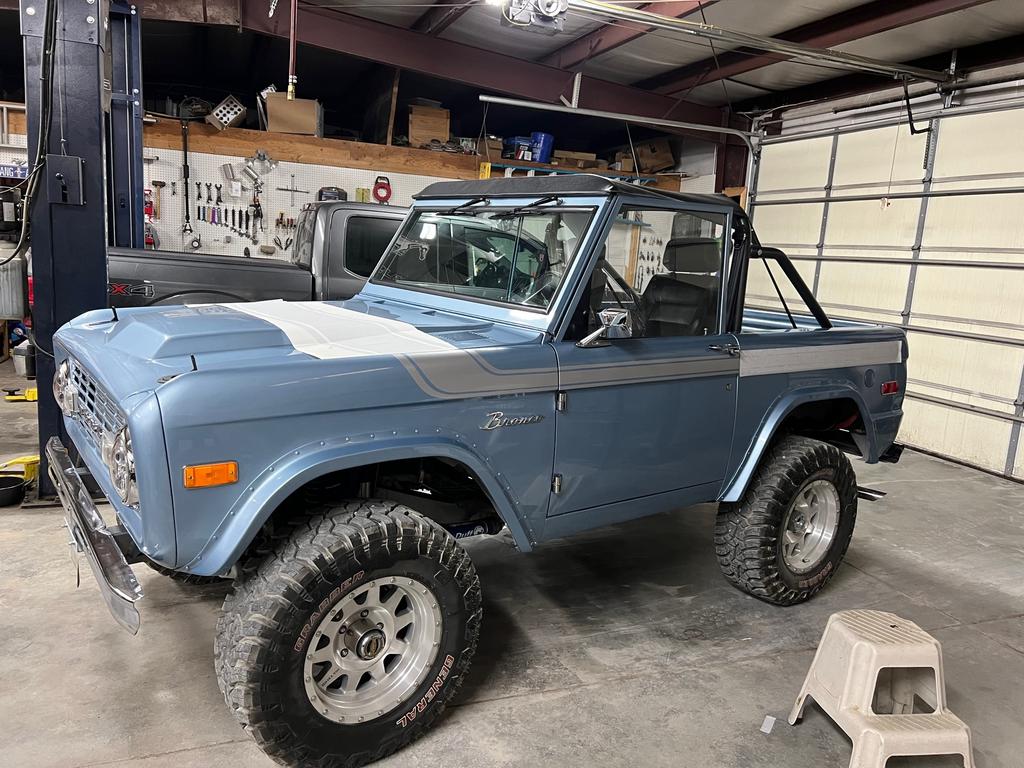 and some final result pics. 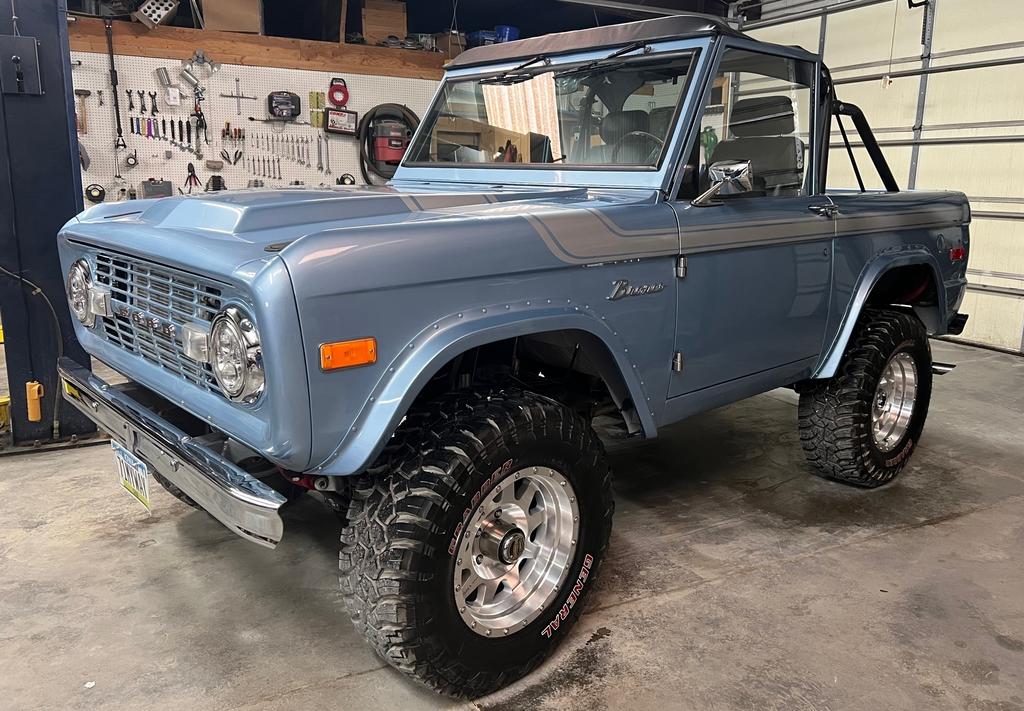 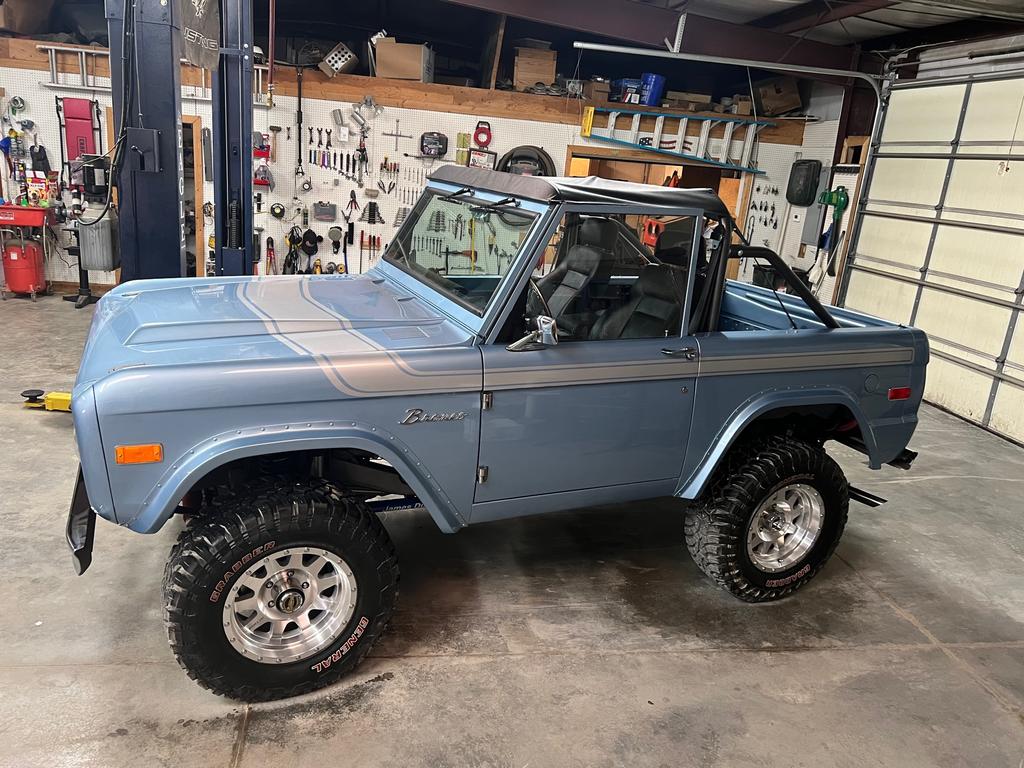 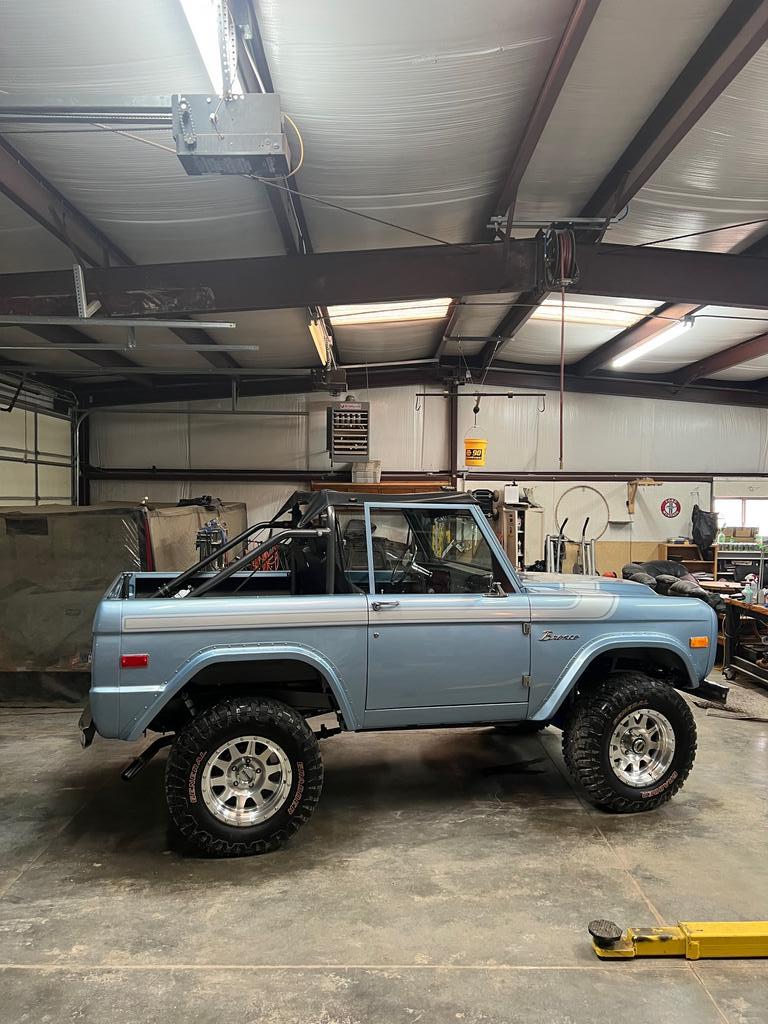 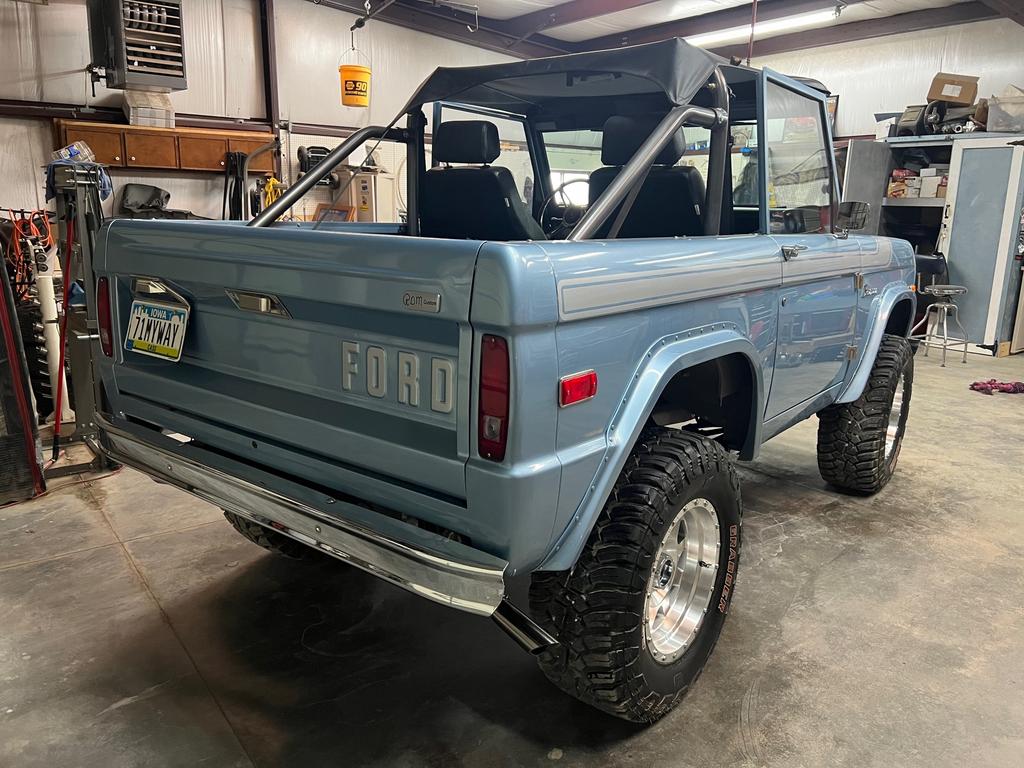 I haven't done too much to the Bronco recently, I have taken it to a couple car shows. a small all make show a few weeks ago where I got a top 20 award out of about 200 cars. there were no classes or anything. then I went to the mustang club of southwest Iowa all ford show recently. this was a huge show, 36 classes. mostly mustangs of course. The Bronco fell in the "Trucks" class. it was I think the largest class there, about 15 really nice vehicles. besides mine there were 2 other really nice early broncos, a nice Bronco II that you rarely see these days, and a couple nicely done custom trucks. the Broncos took first and third, but I still think we should have swept it. we got a first place trophy for that one. a huge trophy made out of a broken crankshaft lol. 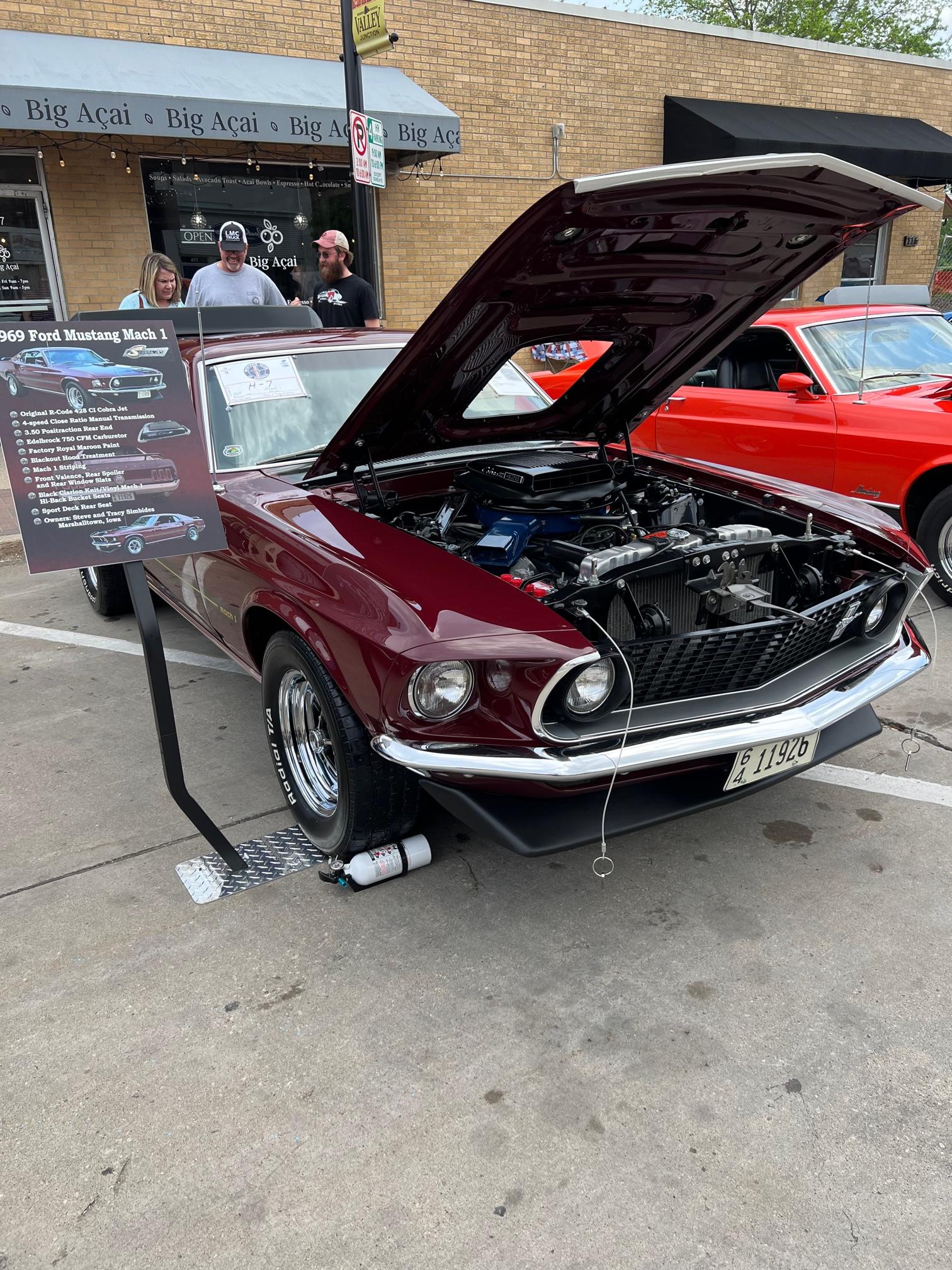 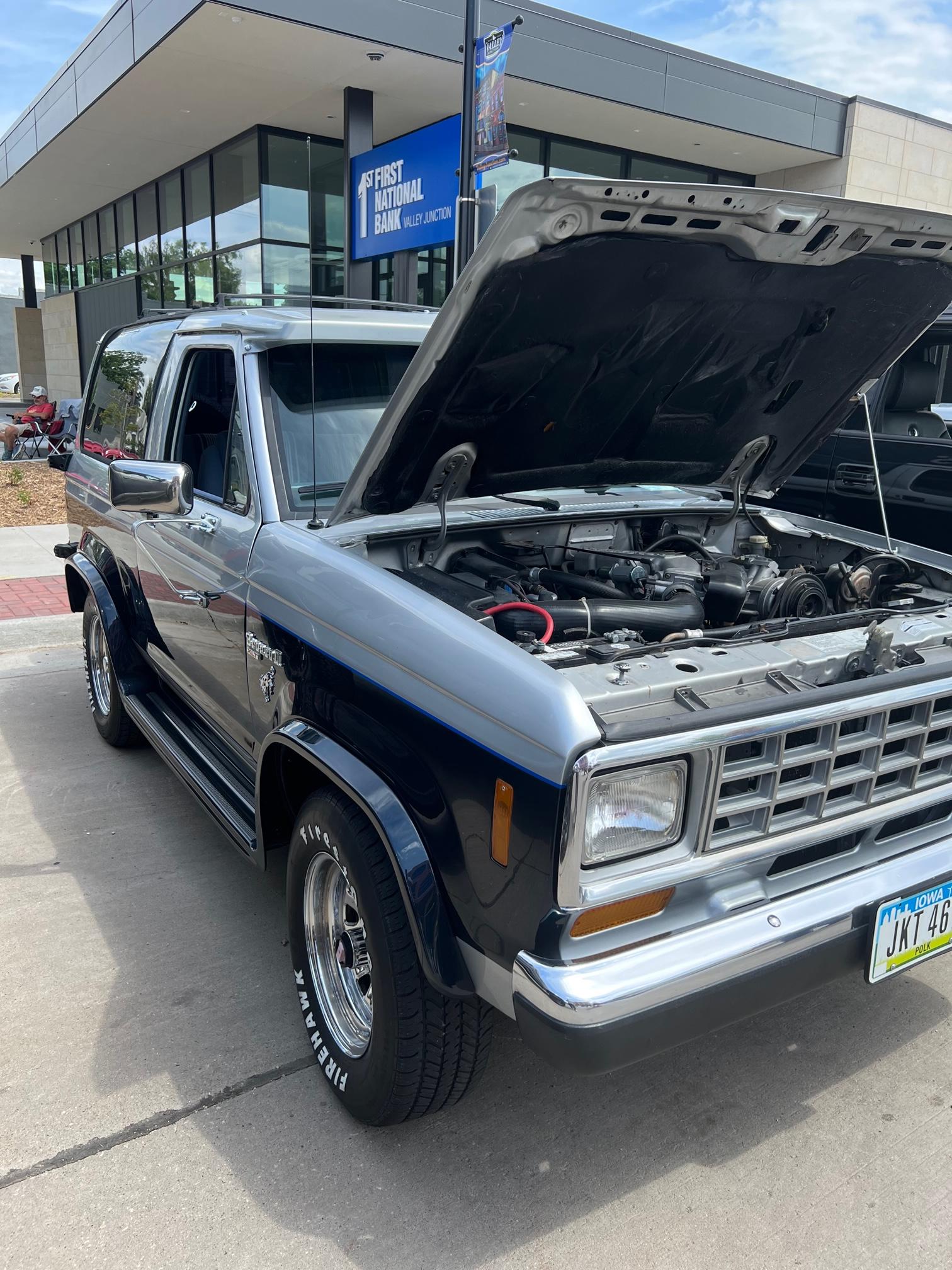 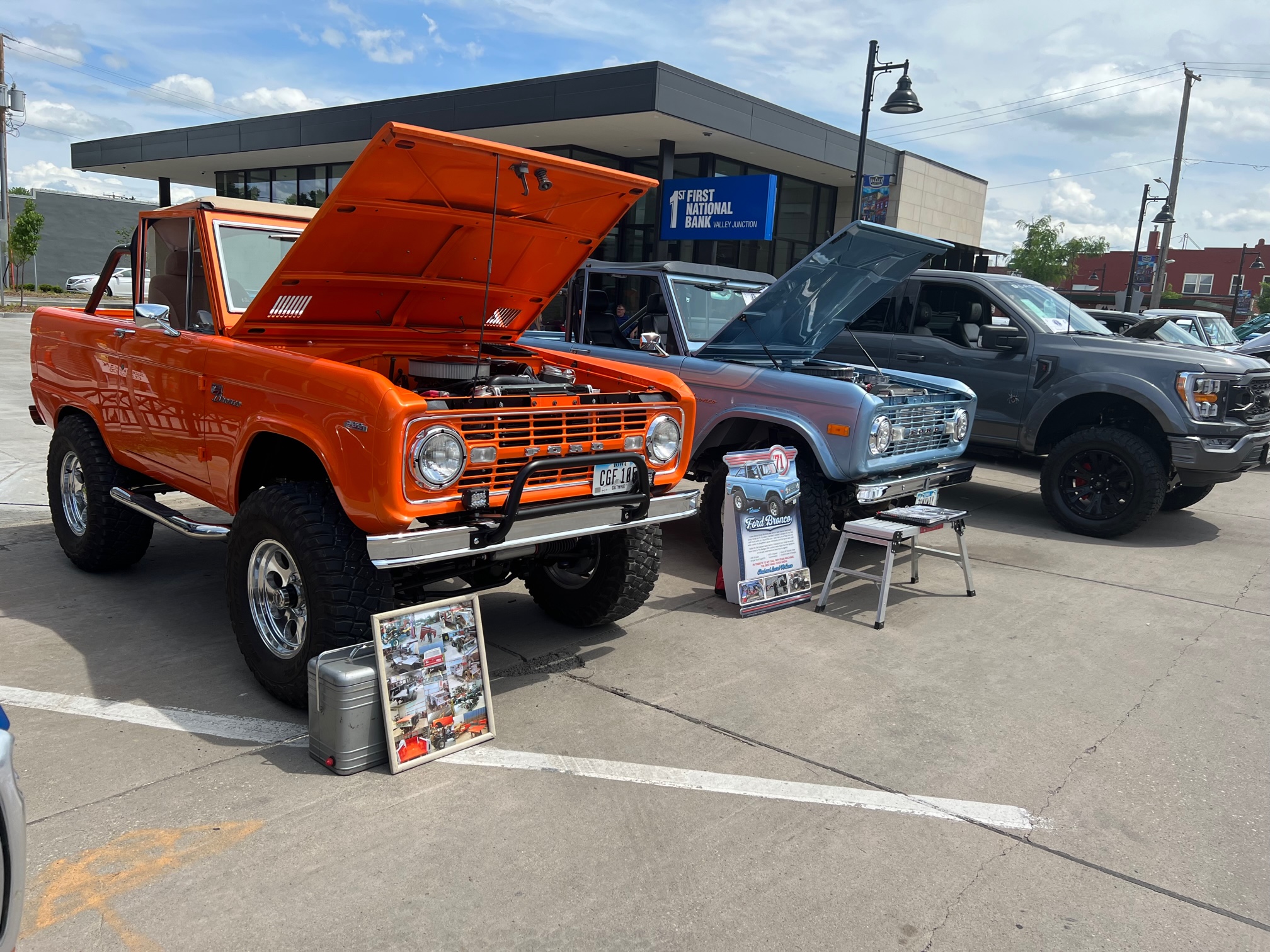 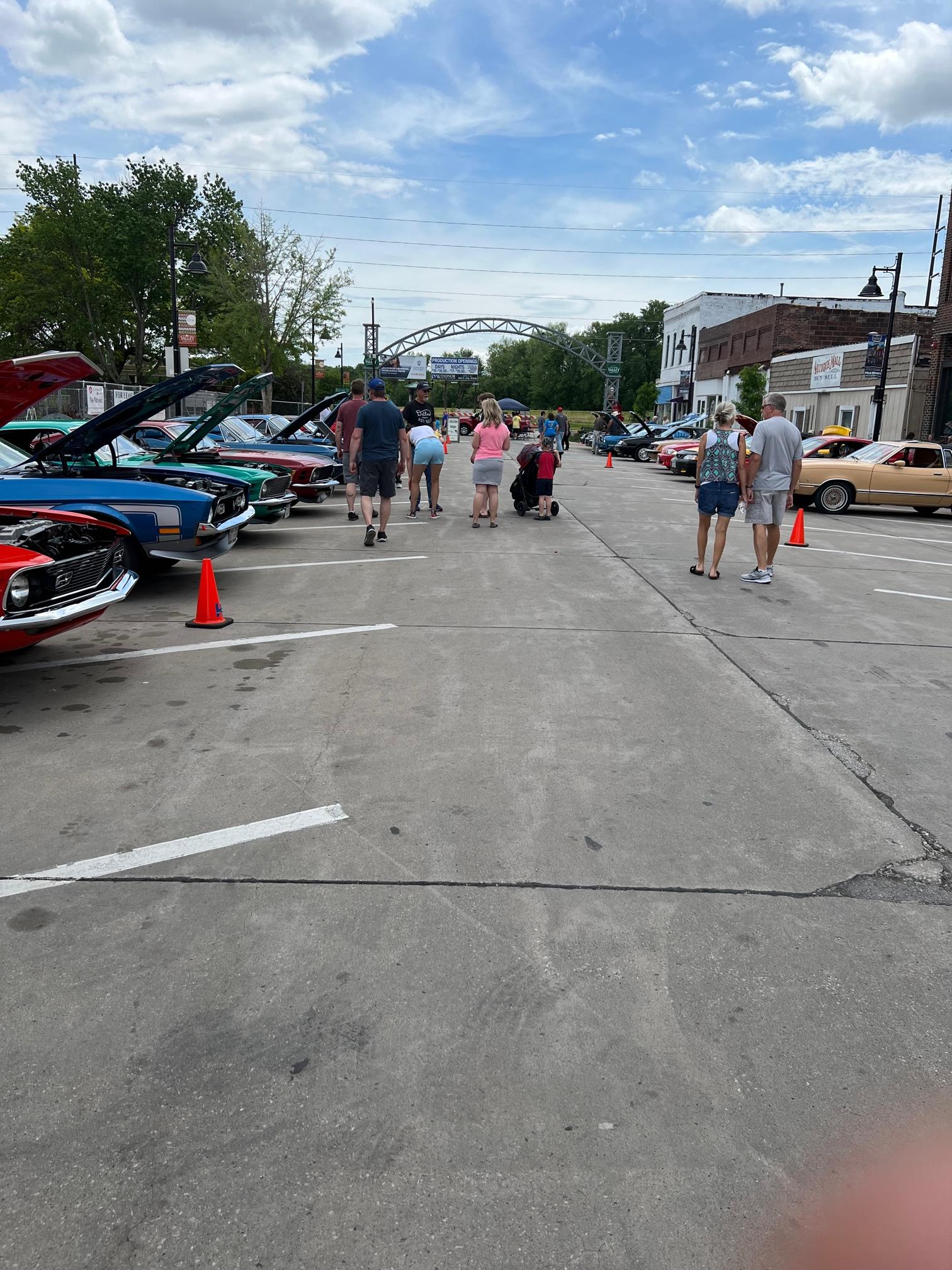 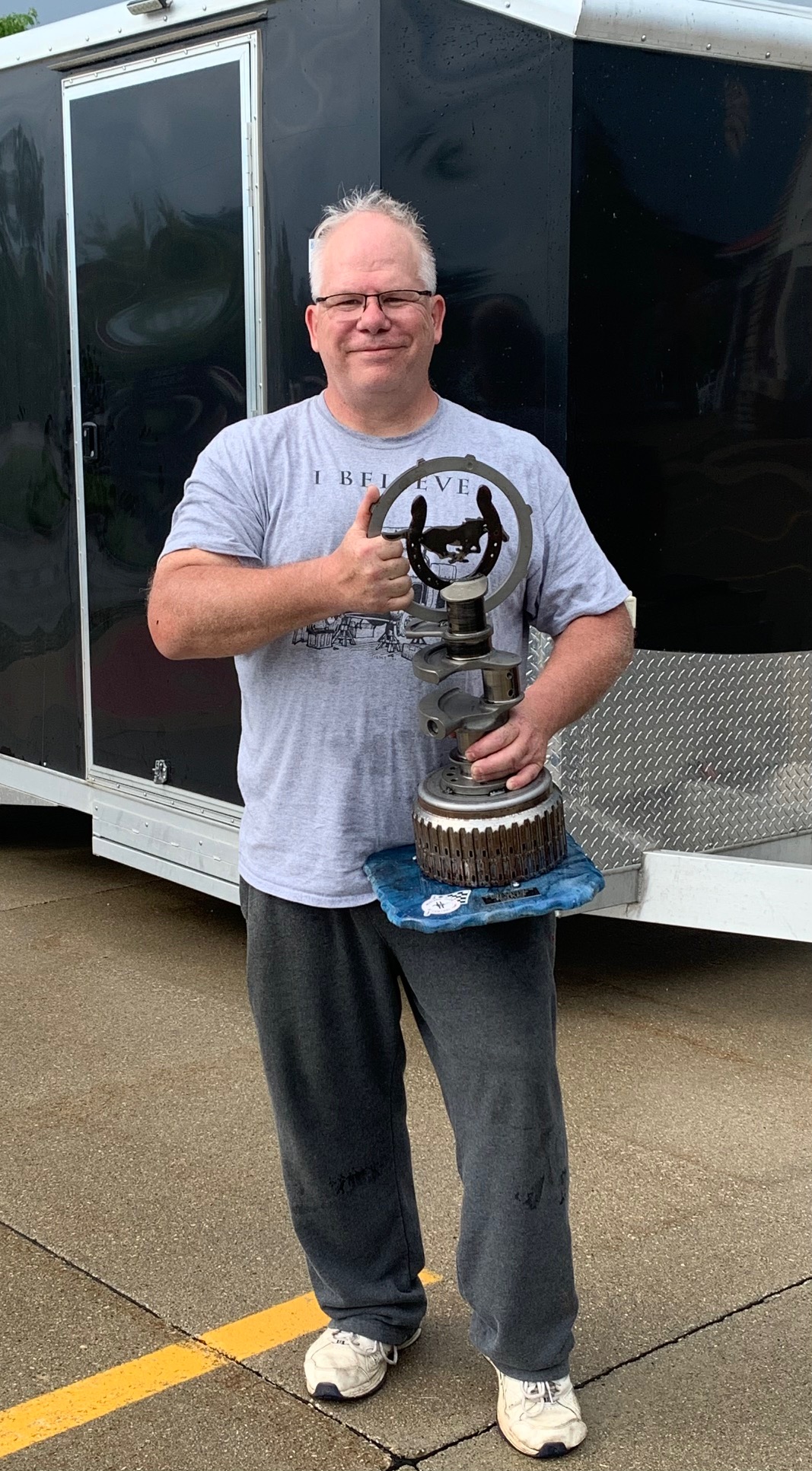 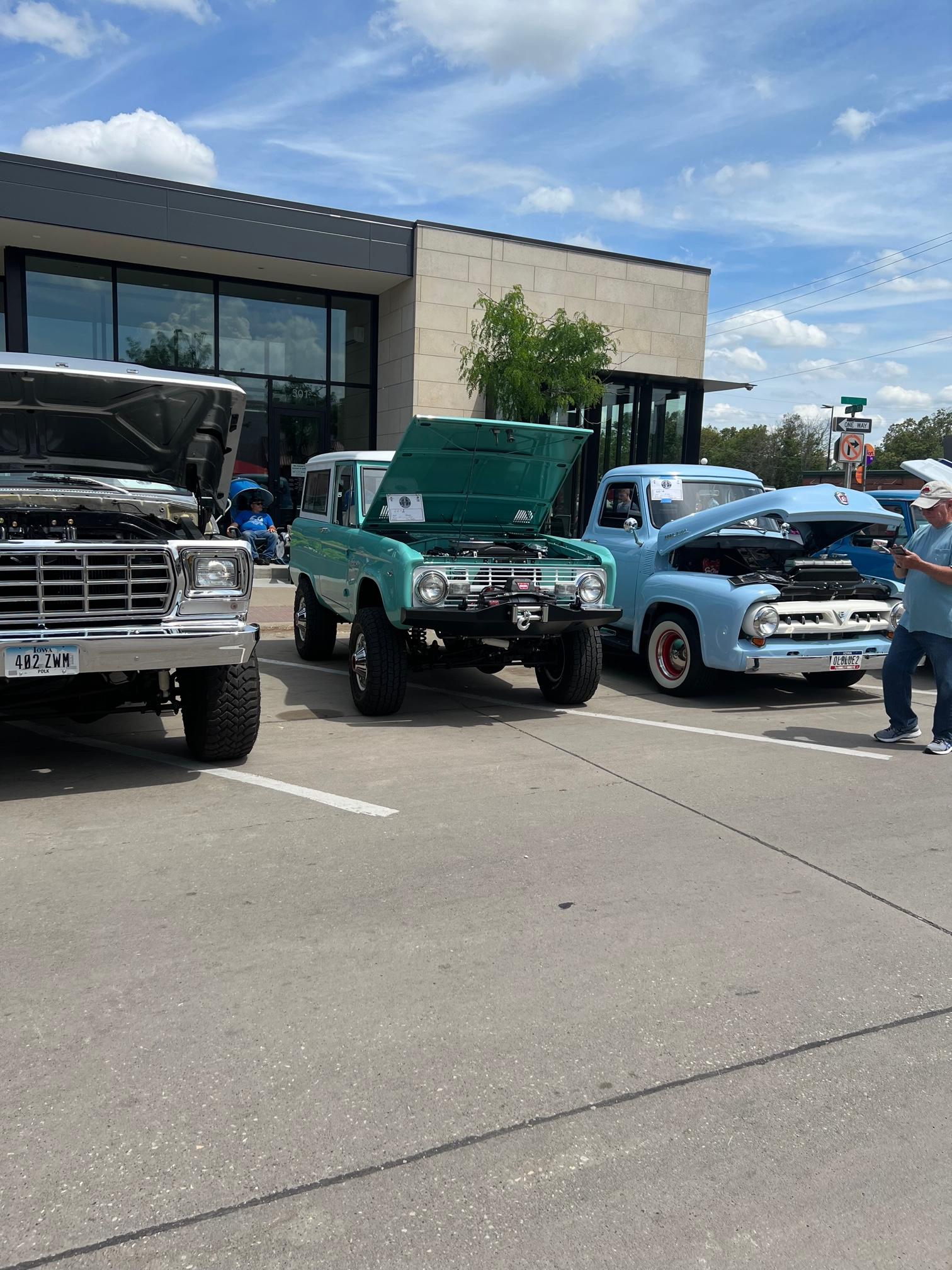 then I decided to add this stainless air dam that goes between the radiator and grill. I polished it and coated it with shark hide so hopefully it will stay looking nice. I think it cleans up the front nicely even though i think it would look better if it was one piece all the way across, but it is made this way to clear the stock hood latch mounting point. 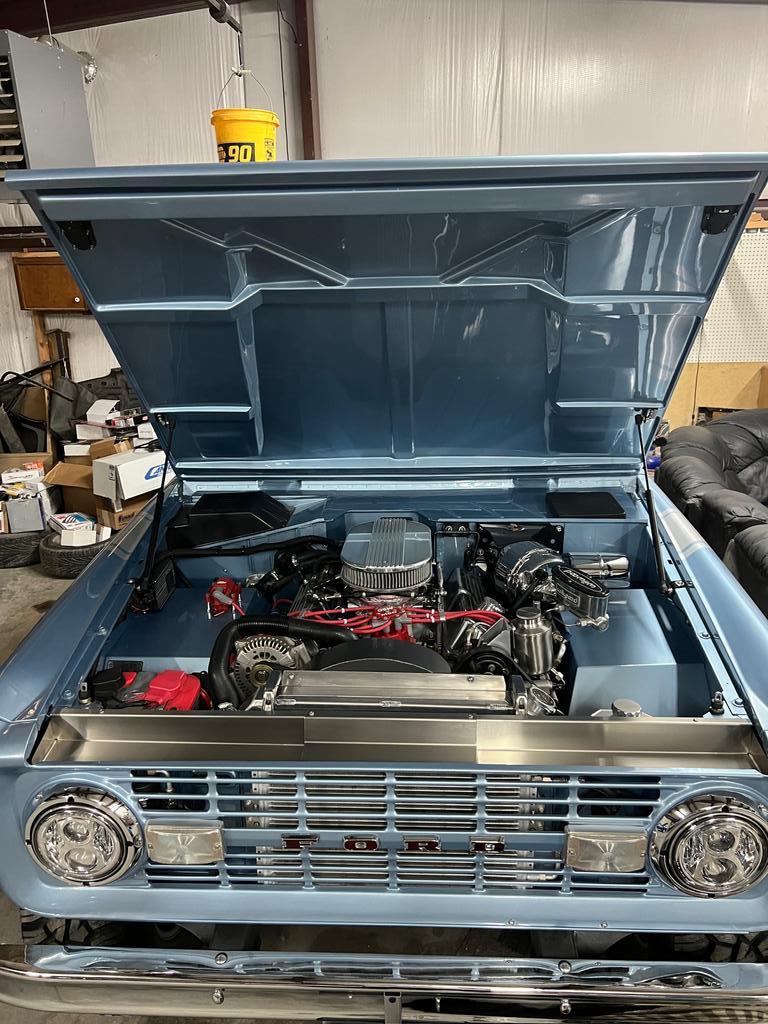 you too man. sorry for the late reply.

I went out to wisconsin dells last month for the bronco supercelebration. it was a great time. we had a near disaster getting there, lol. I was pulling the bronco in my trailer. we had to leave pretty late because I had to work late. it started raining like mad halfway there. I stopped to get gas in this little town and there were no street lights around, just the lights over the pumps. so after I filled with gas I couldn't see crap, between the rain, the lights from the gas pumps and the pitch black out by the streets visibility was terrible. anyway as I start to pull out of the gas station I am trying to see where the entrance to the street is and all of a sudden there is this huge drop and bang. I got out to see what had happened, and there was a drop off by the sidewalk and I had not seen it. my truck was sitting on this concrete wall, the step was sitting right on it. there is no way I could go forward or backward. I took a picture on the way back. this is what it looks like in the daylight. 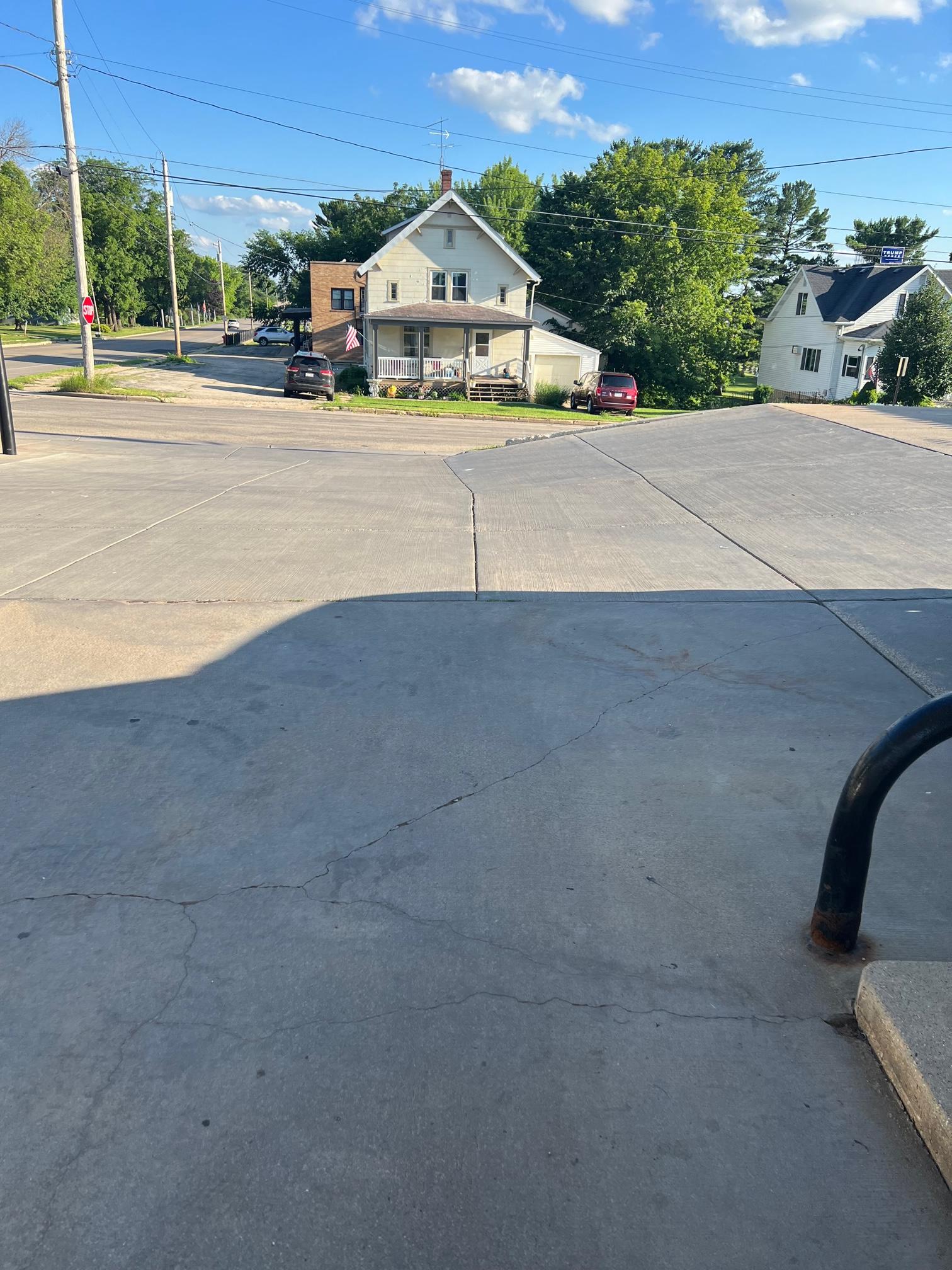 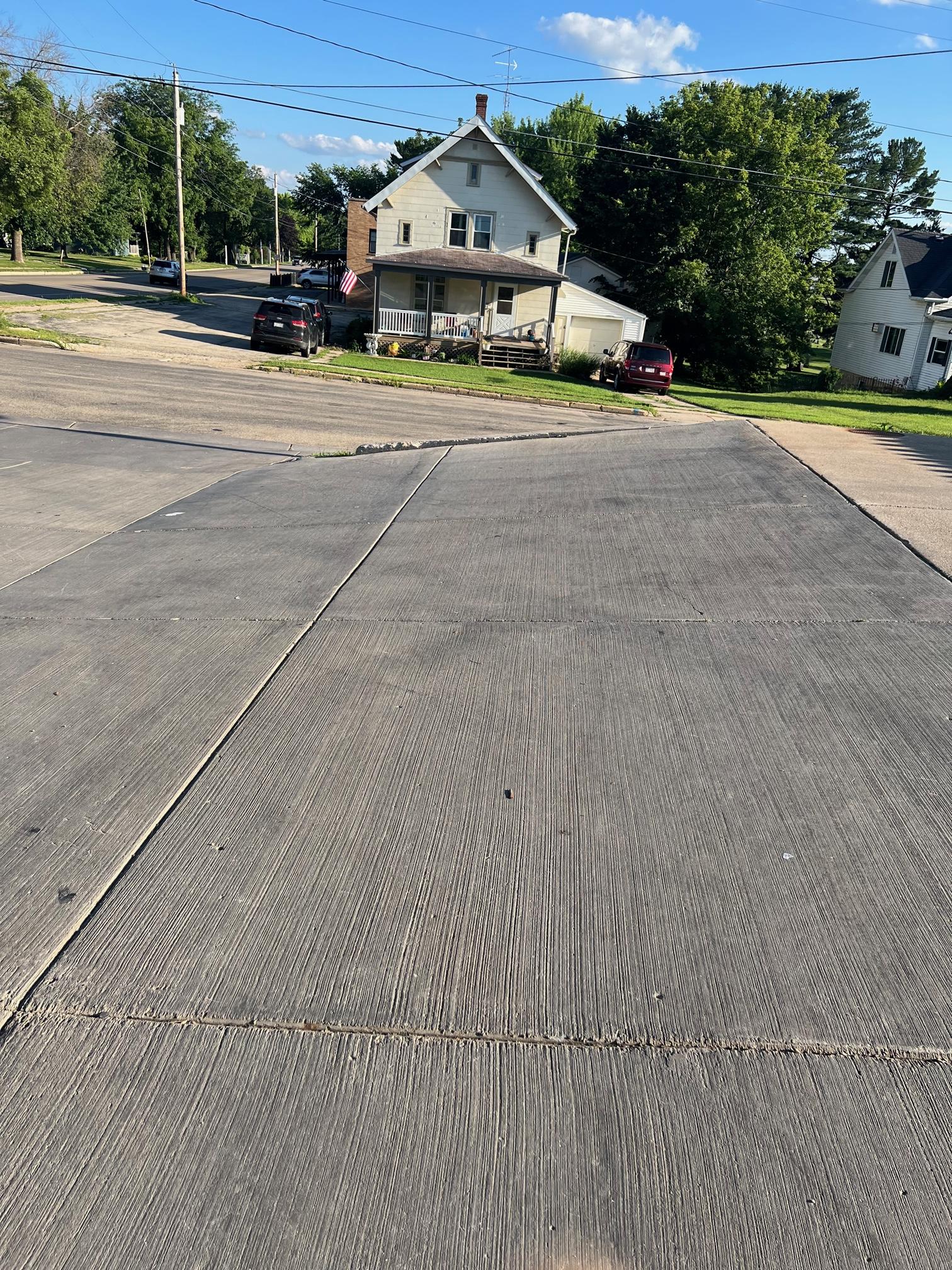 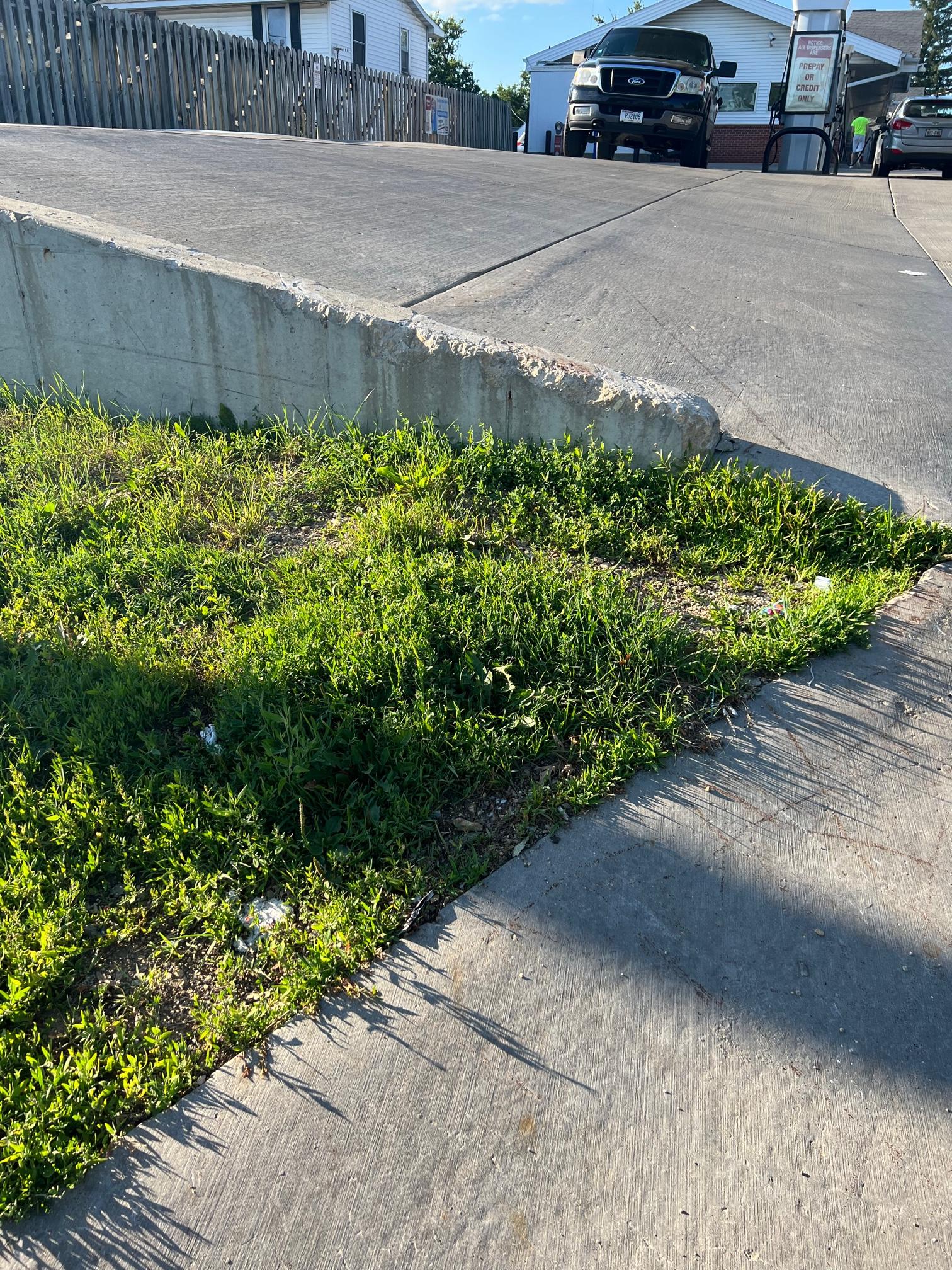 (apparently I was not the only one to have this problem). so its about 11:30 at night, pouring rain and I am stuck high centered on this ledge. I thought I could probably put it in 4 lo and pull it off there, probably scrape the heck out of my truck, probably bust the jack off the trailer at a minimum. so I was in a state. this is what my truck and trailer look like if you will remember. 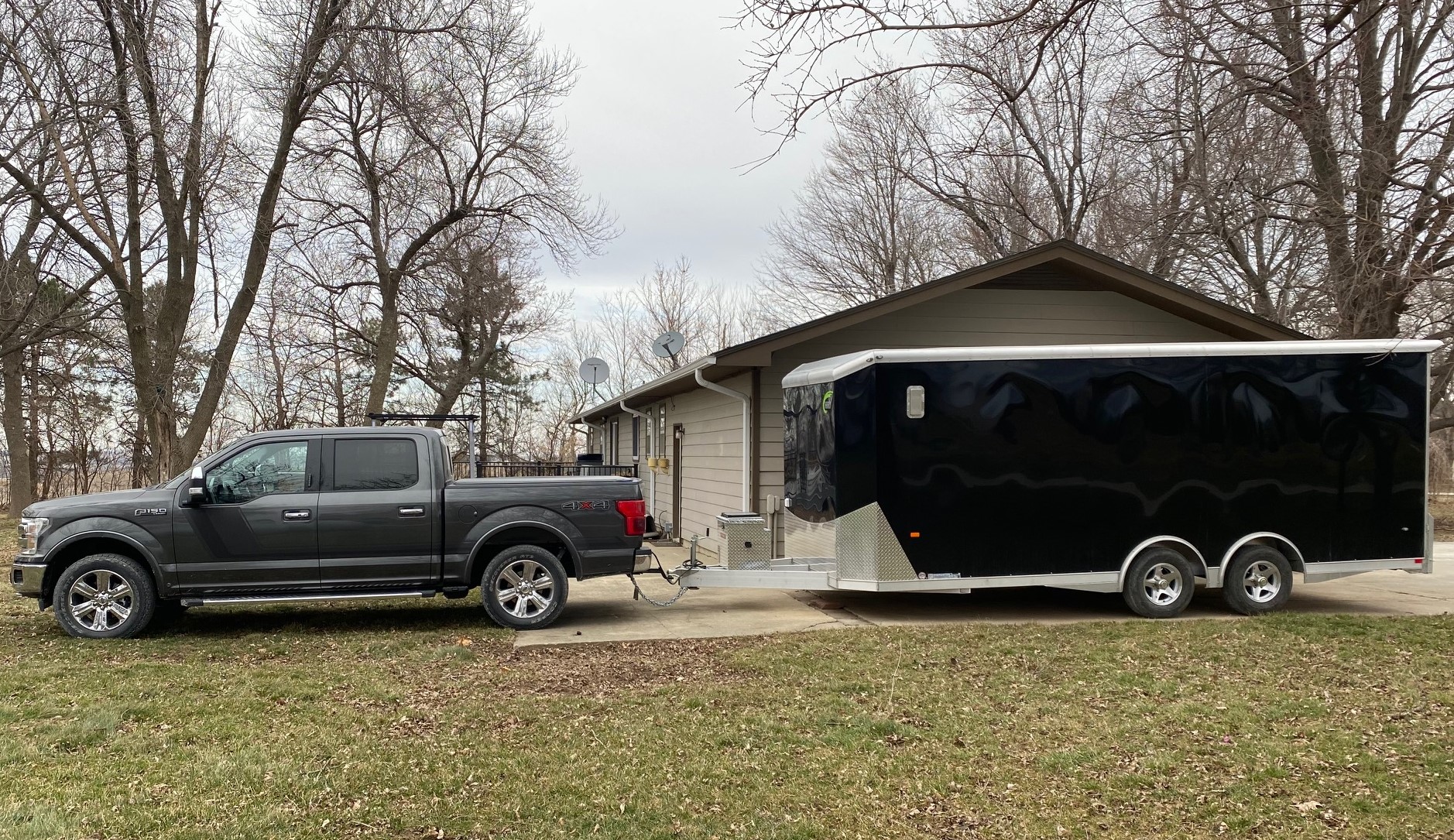 so after swearing and staring for a bit I got a piece of 4x4 and I was able to jack the trailer up high enough to disconnect it from the truck. once I was able to do that the truck lifted up enough I was not dragging on the concrete so I was able to back up a bit and slowly inch it around so that I was 90 degrees to the trailer and just on the edge of the concrete. I hooked it back up and was able to get out of there with nothing but some bad memories lol.

Glad to hear that you got off the wall with no damage.

so after that we made it to the Dells and had 5 days of bronco fun. I saw a lot of nice broncos. did some drives. got to meet a lot of fun people. and generally had a great time. took home a blue award in the modified classs which was a top honor, I think there were 6 given out. and came home with no more drama. here are a few of the pictures I took while we were there. we also did some tourist things and generally had a great time.

here we have the bronco all packed and ready to load in the trailer. 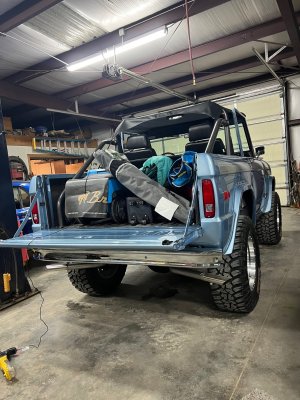 then a couple weeks ago we had our local car show. I have done some more work to the 65 and 67 mustangs and we put them in the show as well as the bronco and came home with 3 trophies. so we had a very productive summer in the trophy category lol. that is my daughter sarah by her car and my son in law Josh by my 65.

Look at those trophies! I got a golden painted Bic razor trophy once in a beard growing contest!

Havasu said:
Look at those trophies! I got a golden painted Bic razor trophy once in a beard growing contest!
Click to expand...