Glad to hear that you got it figured out and can start to enjoy it.

I wish I had your talent!

havasu said:
I wish I had your talent!
Click to expand...

ha you have seen how many times I screw stuff up before I finally get it right, and thats just the times I choose to post it lol. talent no, persistence I'll give you that, I keep at it till I get it. but thanks. the bronco is running pretty well for just the base sniper tune, once my tuner guy gets done with the custom tune this thing will be awesome. it already turns a lot of heads.

mustanggarage said:
ha you have seen how many times I screw stuff up before I finally get it right, and thats just the times I choose to post it lol. talent no, persistence I'll give you that, I keep at it till I get it. but thanks. the bronco is running pretty well for just the base sniper tune, once my tuner guy gets done with the custom tune this thing will be awesome. it already turns a lot of heads.
Click to expand...

All automotive problems can be fixed by throwing more money at them.

Chris said:
All automotive problems can be fixed by throwing more money at them.
Click to expand...

That seems to be my favorite solution smh

mustanggarage said:
That seems to be my favorite solution smh
Click to expand...

I do the same

I put all the weatherstripping on. 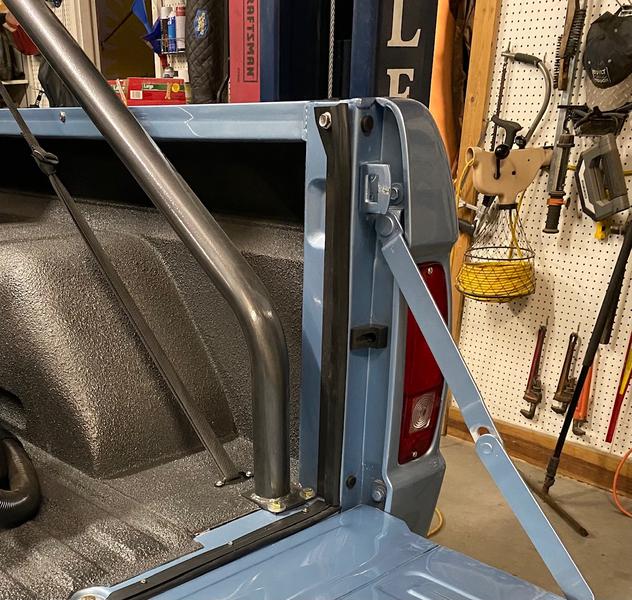 then this weekend, I had my new son in law, help me get the new soft top on. then took it for a nice drive. the heater works pretty good, and the soft top keeps it surprisingly comfortable inside. it seals up much better than I expected. it was a lot more difficult to get it on and in place than expected, but with patience we managed it. 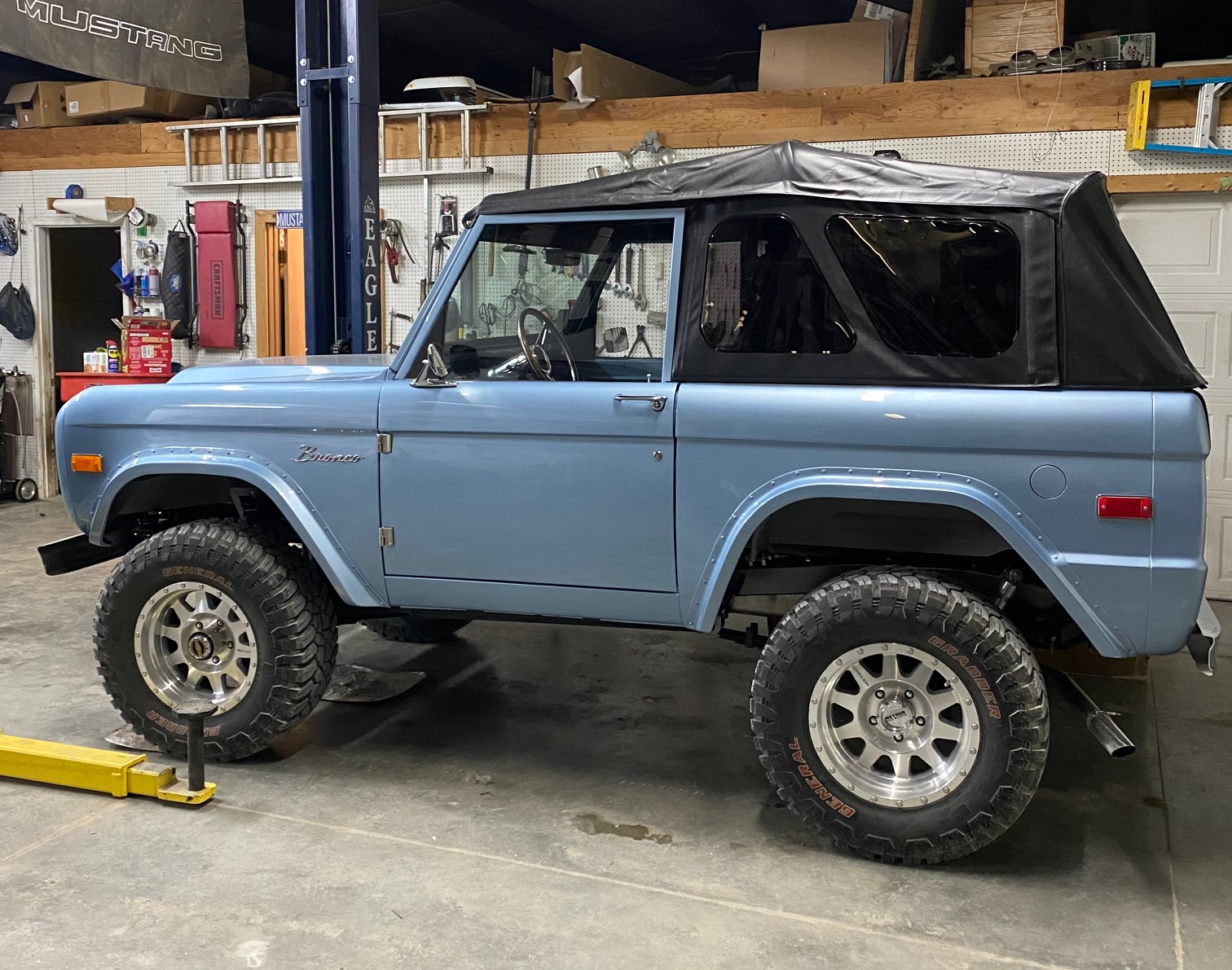 What a showpiece! How hard was it adding the snaps to the body metal?

havasu said:
What a showpiece! How hard was it adding the snaps to the body metal?
Click to expand...

we only had to put the two on, one on each side, and its just drill a hole and a sheet metal screw. used a paint pen on the snap to determine where to drill. it was not difficult. the difficult part was stretching the material to get the windows zipped in. I have had it sitting out, laying on top of my jeep right under my overhead heater, and kept the shop at 72 all week, but it was still a challenge. but we triumphed in the end.

thanks to my eldest daughter for the christmas present. custom floor mats for the Bronco ;D 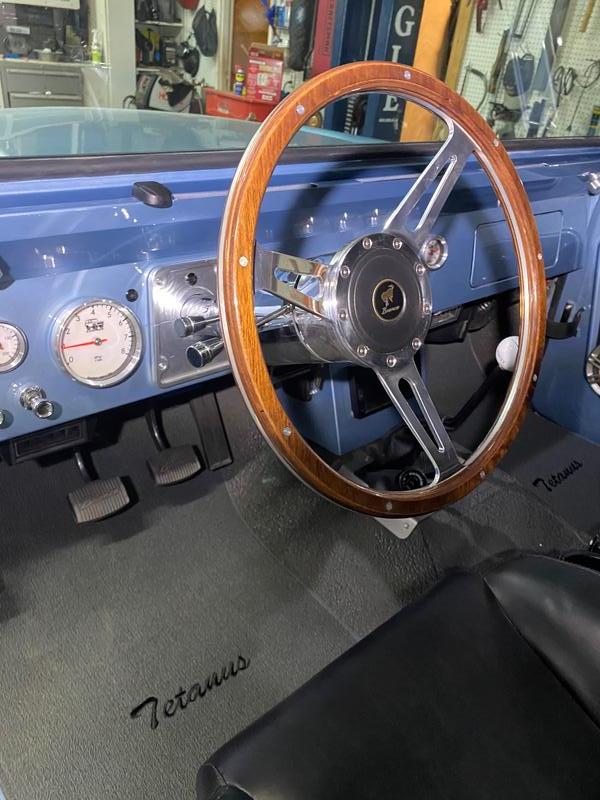 ....but she spelled my name wrong!

a little more tuning on the sniper. It is running great. I am very happy with it. I also have my seatbelts in, and I did some tweaking of the throttle linkage. nothing much but it makes it more comfortable and smoother to drive. I need to bend my dual stick t-case linkage a bit more, it is still not quite how I want it. I eventually plan to swap to an atlas case, but no sense in leaving this less than optimal. I am really looking forward to taking this bronco on a nice cruise somewhere a bit further than around town. hopefully my next weekend off I can get it out and really see what it will do. I still need to get a horn for it, and a couple other minor tweaks, but overall this bronco is ready to show off, I love driving it. it never fails to get a thumbs up and a nice truck wherever I go. about the only major thing I want to do before the car show is I don't like the way the exhaust pipes hang with the body lift, so I am going to see if I can get a custom exhaust place to modify the tail pipes to tuck them up closer to the body. all minor stuff.

Damn, I know I've said it before, but that is beautiful!

I finally got my new Hurst shifter in, I had to do a bit of grinding to get it to fit but it works, and I made a panel to cover the area because it is such a pain to get that transfer case shifter adjusted properly. I lizard skinned and raptor lined it to match the floor, and screwed it in. I like it. 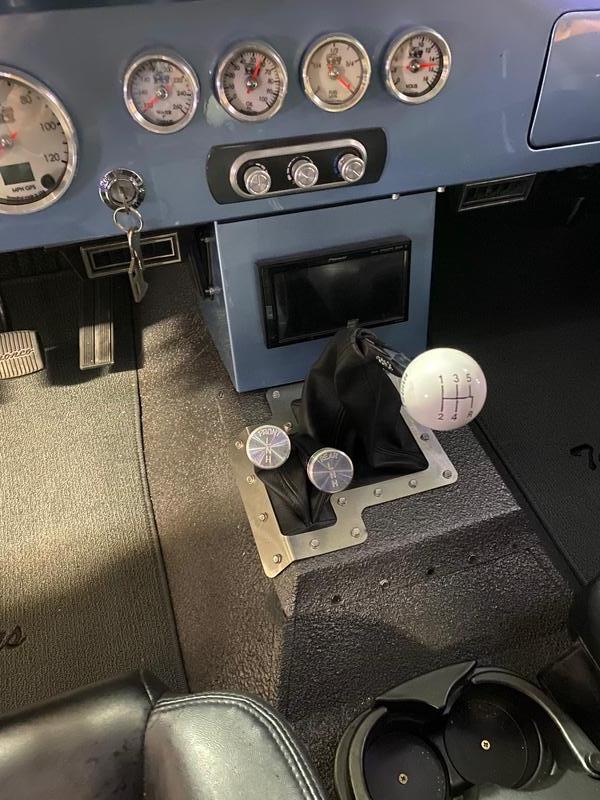 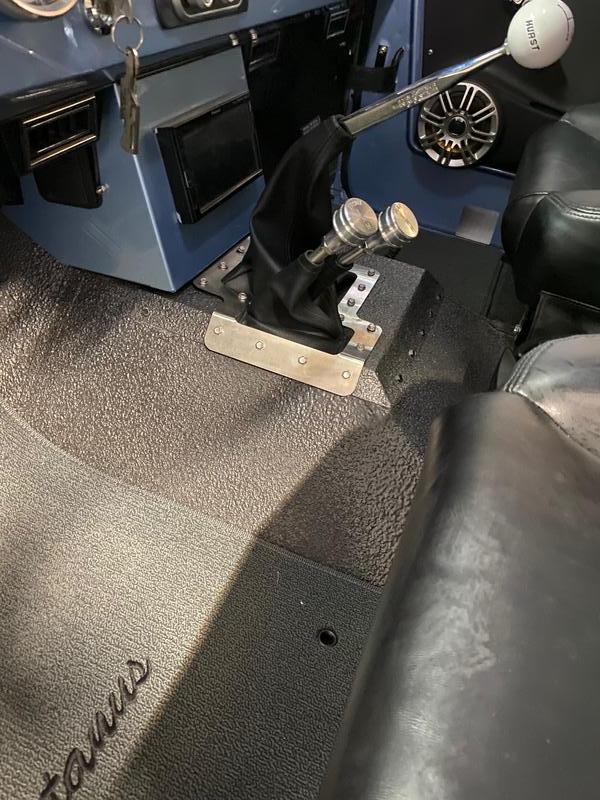 and since I am going to the bronco safari I decided I wanted to add a winch to my car trailer to make it easier to get the bronco in and out. and then it hit me. the bronco won't fit in my trailer lol I had to air the tires down to get it in there after it was painted, and with the windshield wiper and cover, and the riser for the bikini top, it just wasn't going to fit.

my trailer is a 2007 and it needed some work, the tires were weather checked and I was going to replace them before going to moab. and since I plan to take the bronco to some other shows this year I decided it was time to upgrade.

I put a down payment on a new Neo 20 foot trailer with a 7 foot interior which will give me 6 more inches of door height. I may still have to air the tires down to get the bronco in with the bikini top on, but it will fit. I get to pick it up friday. man the cost of trailers has really gone crazy. I bought my haulmark in 2007 for 5500 dollars. I decided it was still in pretty good shape despite needing some tlc so I listed it for 4000 dollars on facebook. within 10 minutes I had 6 messages, a guy showed up at my door an hour and a half later with the cash. apparently I did not ask enough lol.
anyway I got what I thought was fair, and I get to pick my new trailer up friday. I am anxious to do some personalizing on it. I will add the winch and I am going to do something with the truck tool box I have had in my old trailer for years. I am looking forward to playing around with this trailer this year. I have already ordered some new wheels for it, I have the winch and everything ready to go in also.

here are a few pictures from the dealer I bought it from. 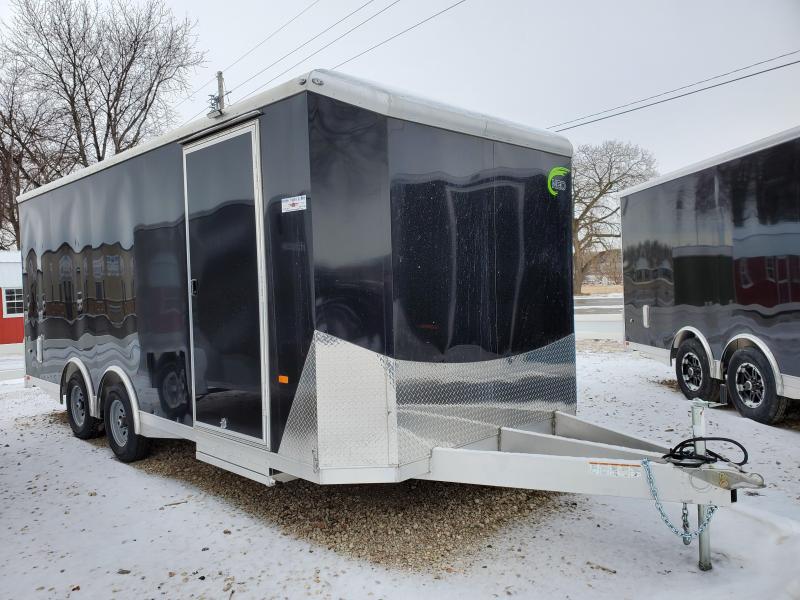 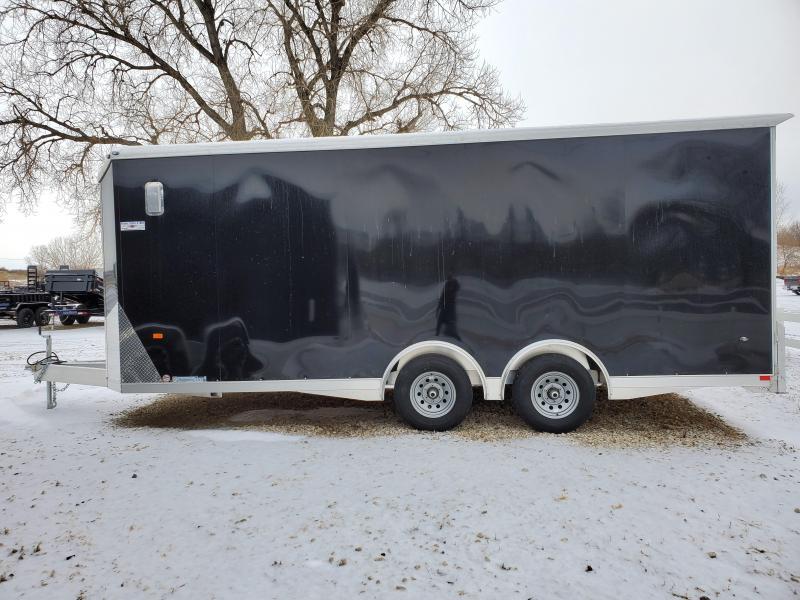 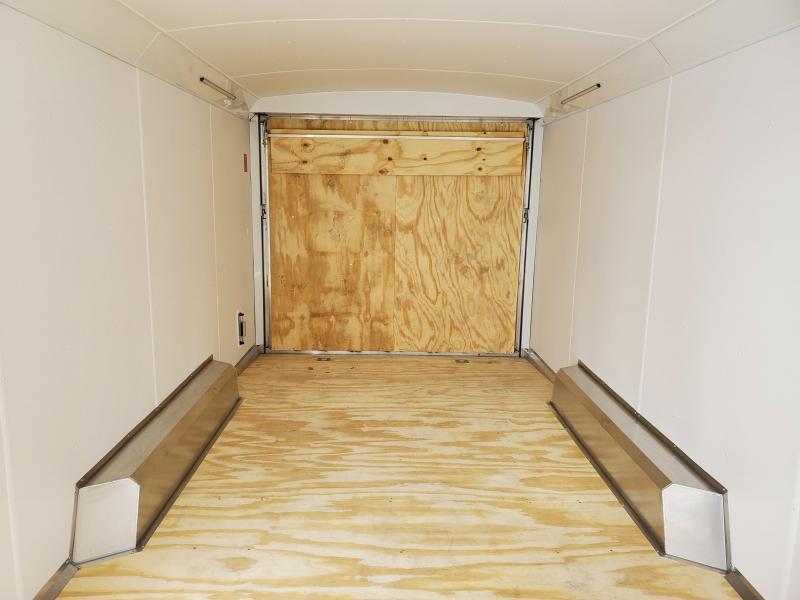 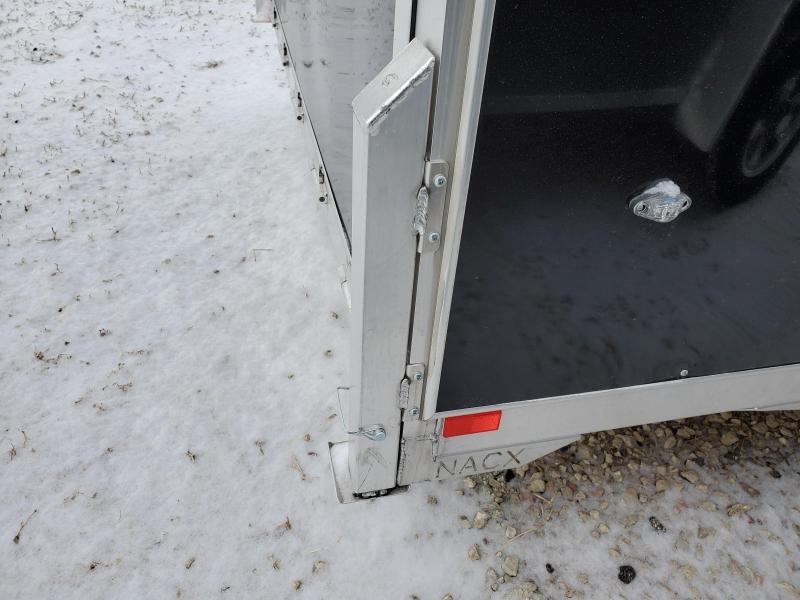 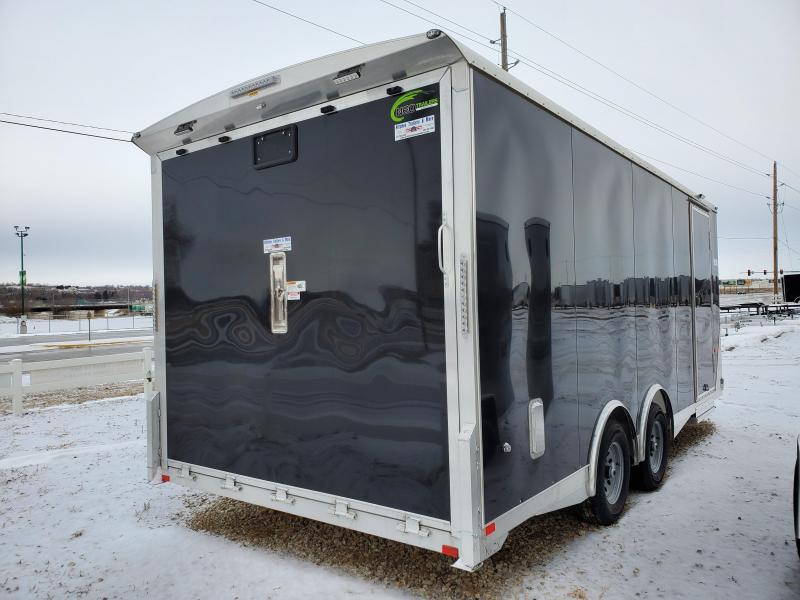 You sure don't fart around with your builds. Lizard skin boot? Holy crap!
Nice trailer too!

No I lizard skinned the metal panel. I made. The boot is just leather

lol. I had to look that word up. So I guess we are both schleppers