Well...did you get that thing muddy yet?

afraid not, you know that modification I did to the breather so I could fit it under the hood without the 2 inch body lift? well it bit me in the butt. one of the little screws popped off and went down the intake the day after I took that drive. I was so ticked off I just had My friend rick take it to his shop to see if he could see any damage with his borescope. and he has been so busy he finally looked at it yesterday and there was some metal inside so he is going to have to pull the heads and take a better look. so I haven't driven except that one time. hopefully I will not have to pull the engine and rebuild it again. jml.

Dang, hopefully it's nothing major.

Hopefully there is no damage.

well, my friend Rick has been very busy. I guess I should have just done it myself. I thought it would be faster to have him do it, boy was I wrong lol. anyway the good news is there was no major damage. all the valves were fine, the pistons and cylinder bore was fine. and no major damage to the head. so we had the valves lapped for good measure, we got them back from the machine shop today. hopefully I will be able to get it back home by the end of the week. I have to be out of town until friday but hopefully I can take it back home friday and get back on track.

mustanggarage said:
well, my friend Rick has been very busy. I guess I should have just done it myself. I thought it would be faster to have him do it, boy was I wrong lol. anyway the good news is there was no major damage. all the valves were fine, the pistons and cylinder bore was fine. and no major damage to the head. so we had the valves lapped for good measure, we got them back from the machine shop today. hopefully I will be able to get it back home by the end of the week. I have to be out of town until friday but hopefully I can take it back home friday and get back on track.
Click to expand...

the bronco is back home. after a month of mostly sitting in the shop waiting for my mechanic friend to get it back together. but it is back together, I had him relocate the o2 sensor to the passenger side because the wiring was a little too close to the front driveshaft for my comfort. and it is still running like crap. I need to let the fitech system learn a bit. I did some programming on it tonight and I think I have some things sorted and it sounds a bit better. I am going to get it aligned tomorrow, then I can take it out and really drive it a bit. of course it is getting cold out and I have no top for it, or roll bar, or seatbelts etc. so I can't drive it much or far yet. I decided to sell my 89 convertible so that I could pay some bills and get some more parts for the bronco, I ordered the roll bar, the soft top and a bunch of small parts for it. those will be coming soon. I will probably get the top put on over christmas when my daughter is home. in the mean time since I am going to drop it off for the alignment tomorrow I put the doorpanels and center console in today. to make the interior look finished even though it is not. 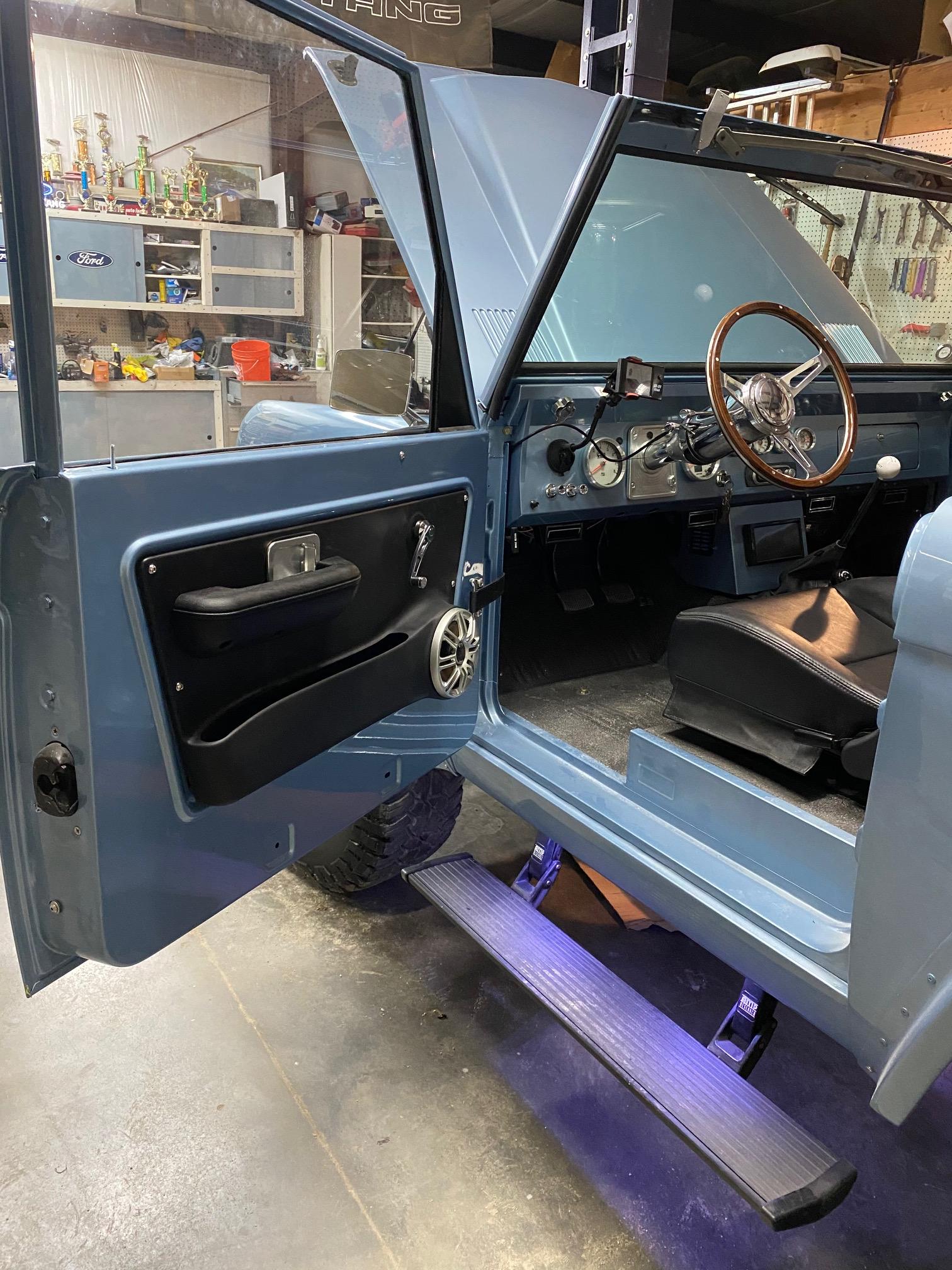 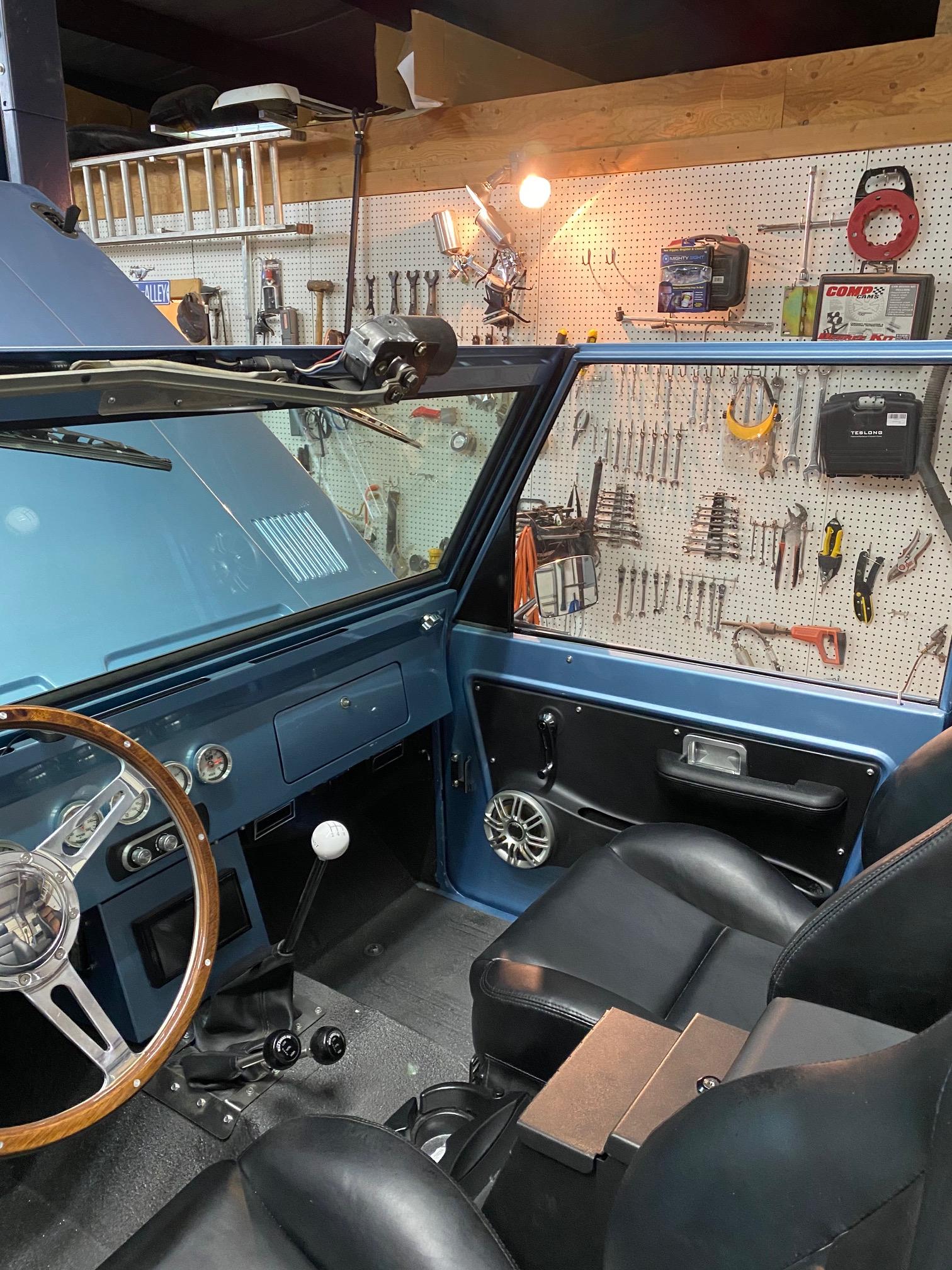 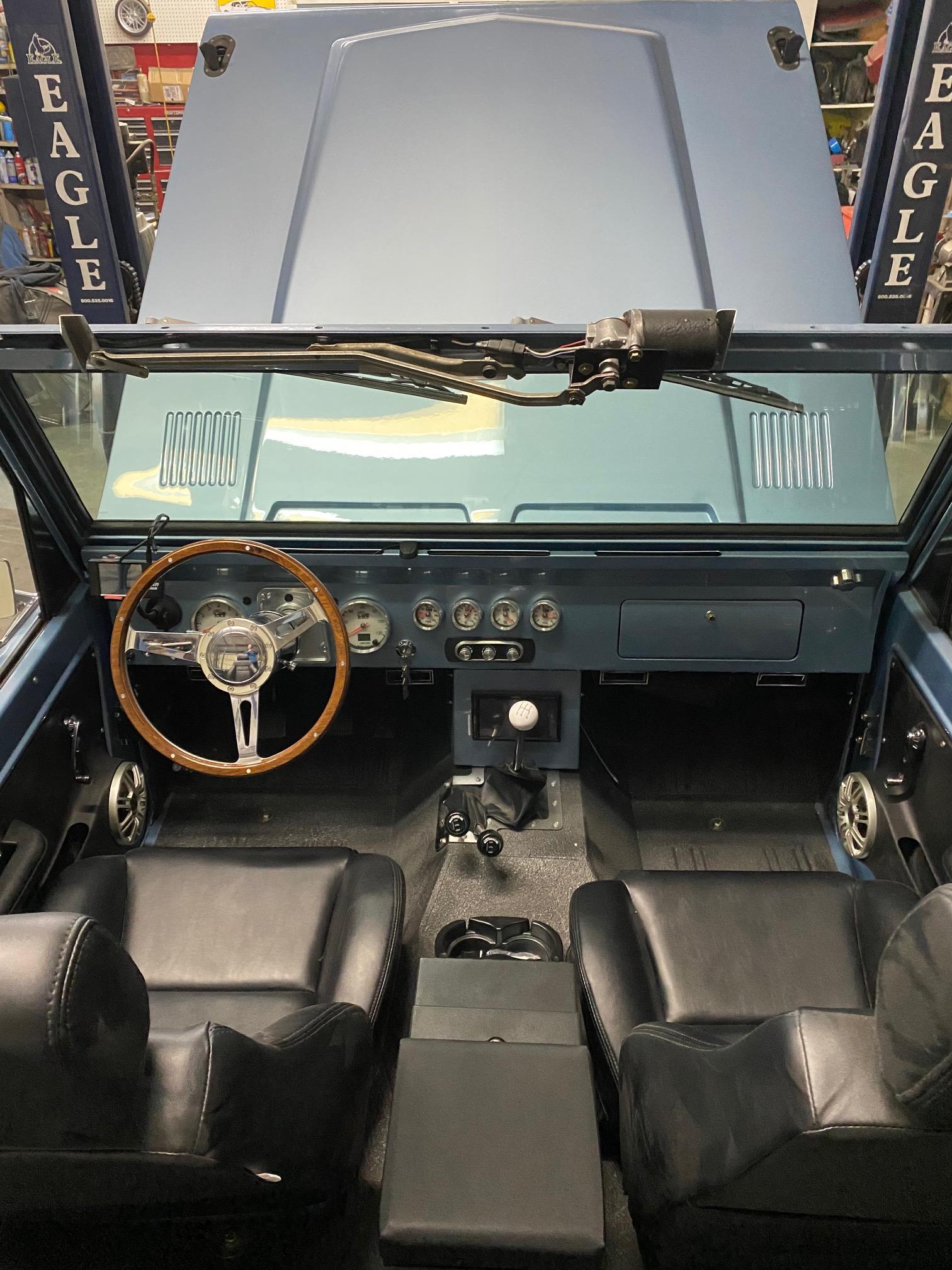 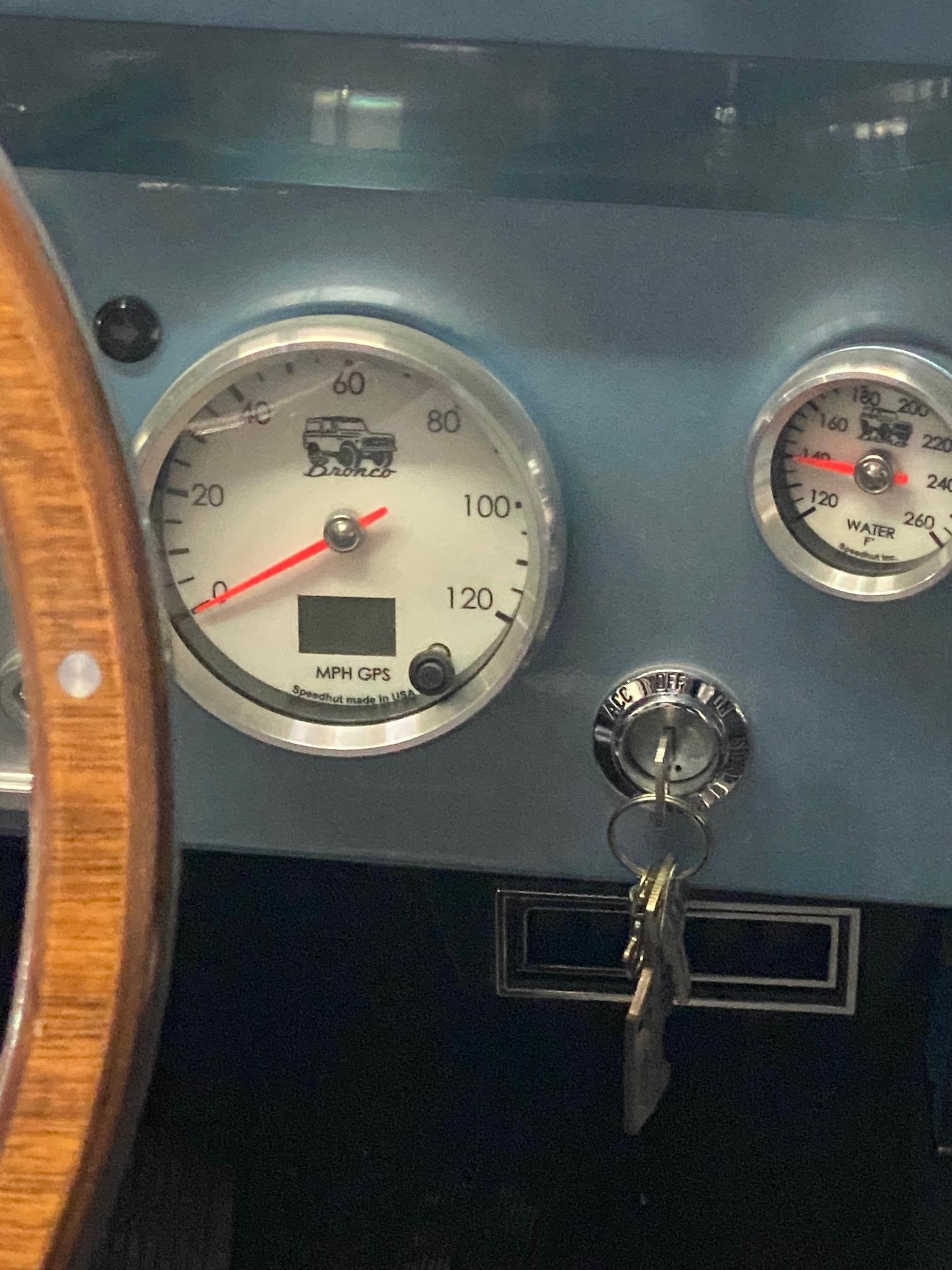 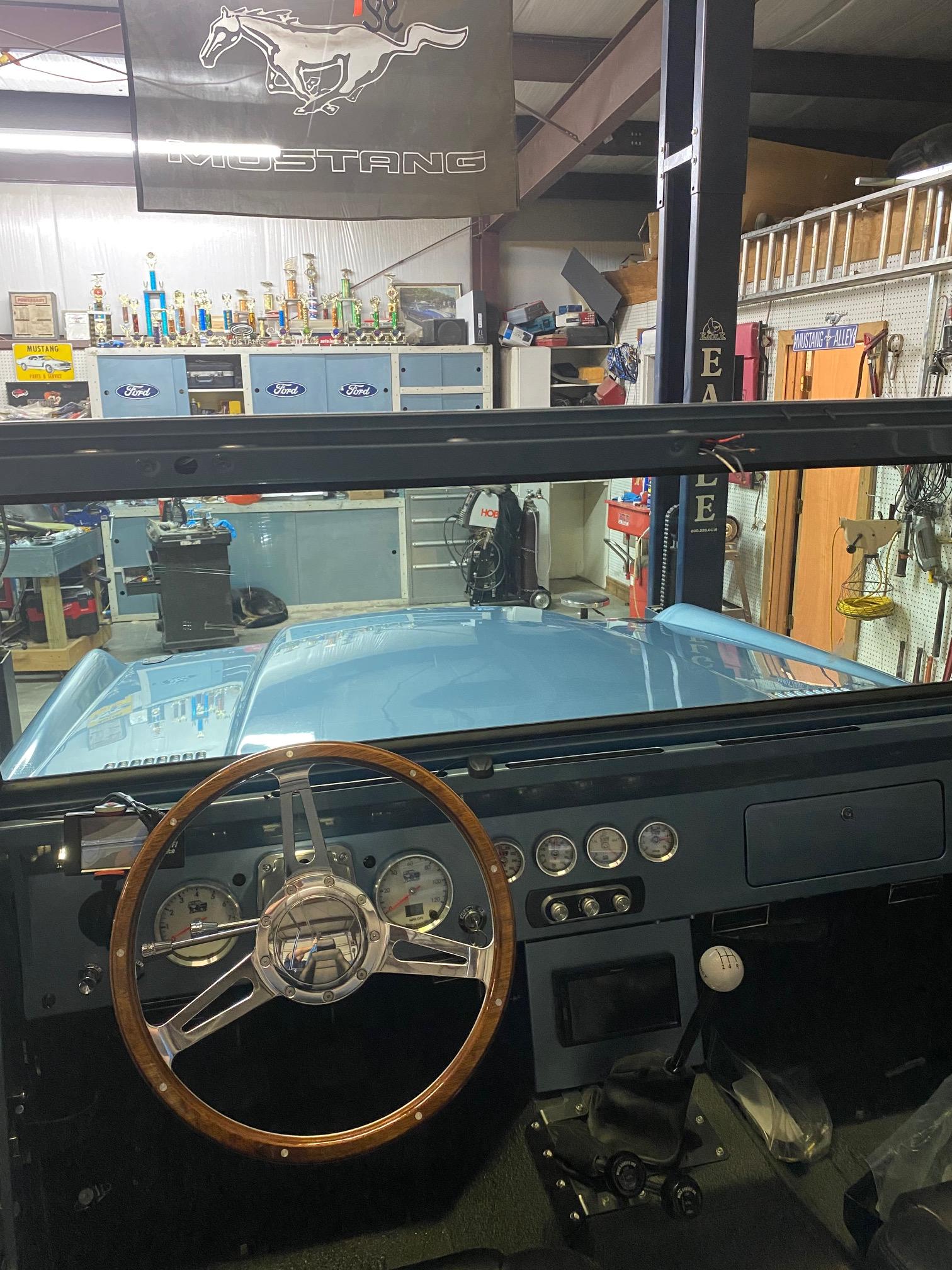 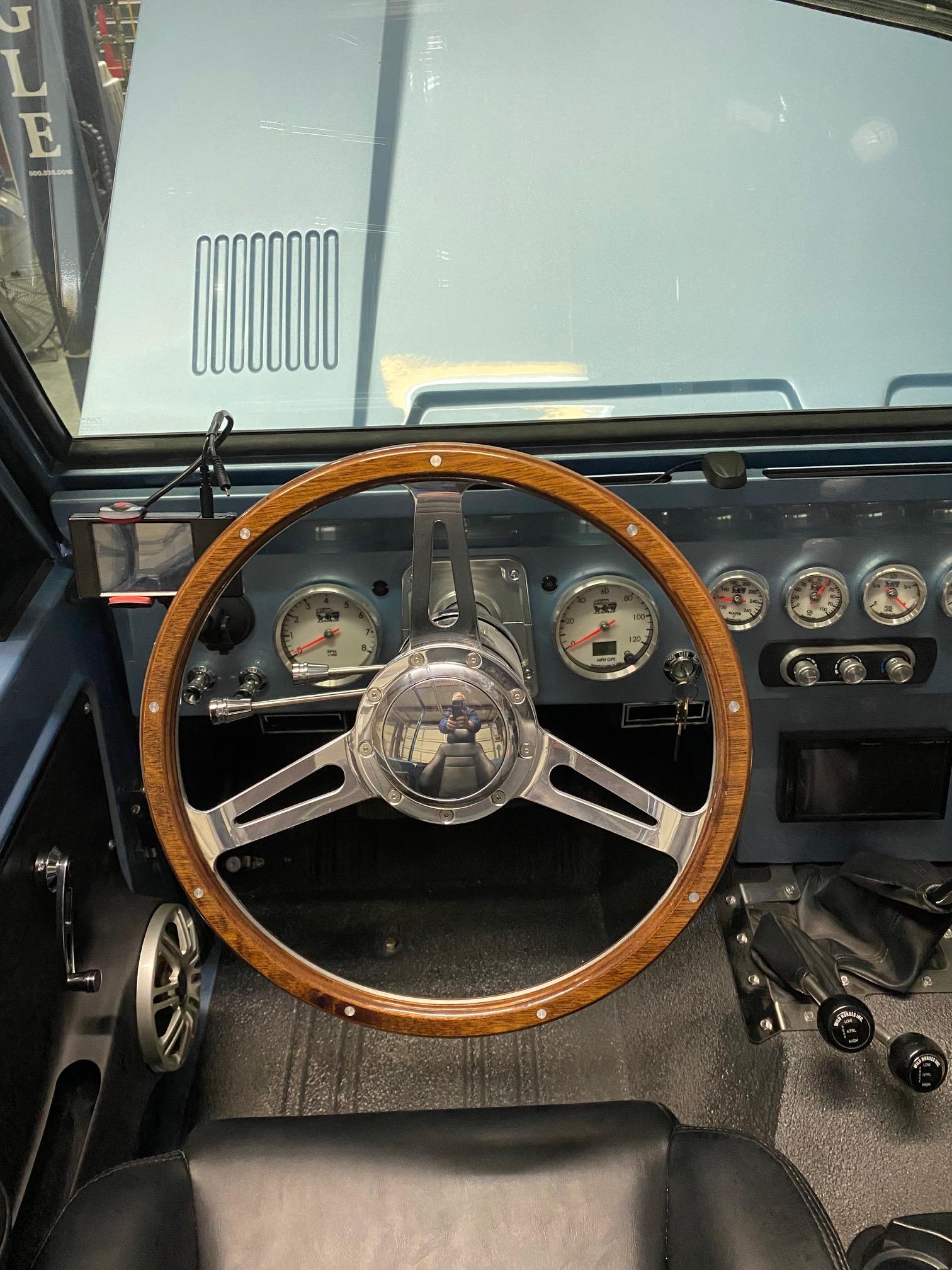 The Crowne Jewel! Damn, I love that thing.

time for an update. I struggled with the fitech for a very brief period of time, but I could not get it to run right and the instructions and online support were no help. I kept seeing videos for the holley sniper system whenever I researched questions, and the system seemed so much easier to work with so I dumped the fitech and swapped in a holley sniper system. it runs 100% better. I have a guy who tuned my convertible who helped me figure out a couple adjustments. it isn't quite there yet. but it is running a lot better. It just scoots when you mash the pedal. but its a bit chilly driving with no top lol. I am still waiting on my roll bar I ordered from toms bronco parts. once I get that in I can put the top on it. in the mean time I put the top front adapter plate that is necessary for both the soft top and the bikini top on, and it also covers the windshield wiper cover so I could install it. I also finished up the speaker install and found that the one piece windows made the door panels not fit properly so I had to modify them. I have discovered a power steering fluid leak which I am struggling to stop and a rear main seal leak which will have to be addressed at some point. it is a one piece rear main so I will have to drop the transmission to do it, gggrrrrrrrrr. but the truck is running pretty well and it gets a lot of positive looks when I am out, either that or they just think I am nuts driving around with no top when it is 48 degrees outside lol. anyway I am making slow progress. next things are to continue to tune the engine, I want to raise the center console up a bit so I can move it forward so I am going to get some square tubing and make a base to lift it slightly.

here a re a few recent pictures. 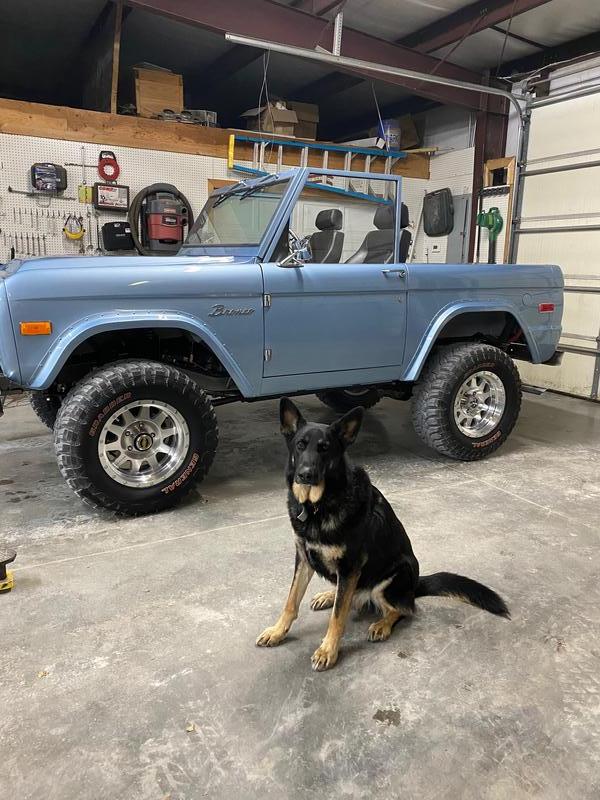 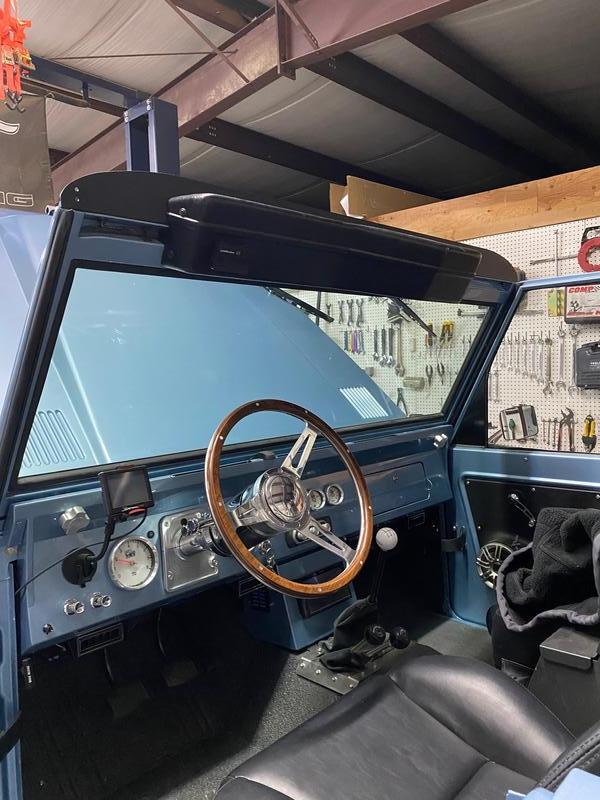 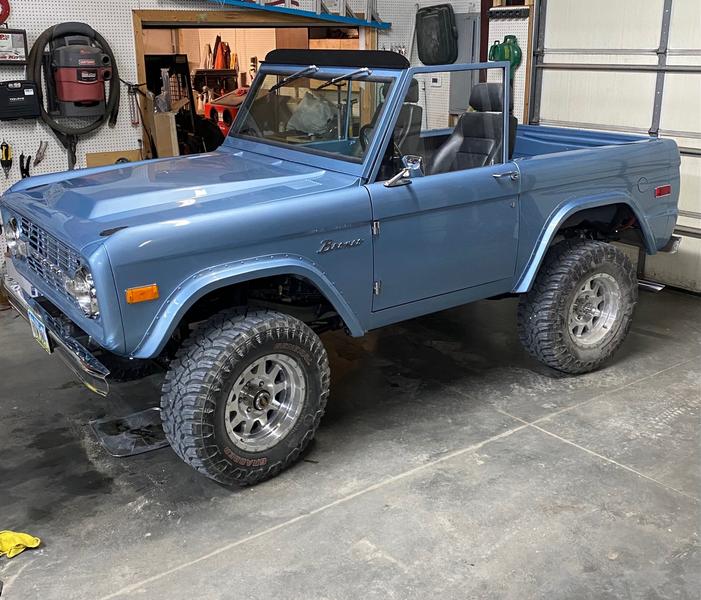 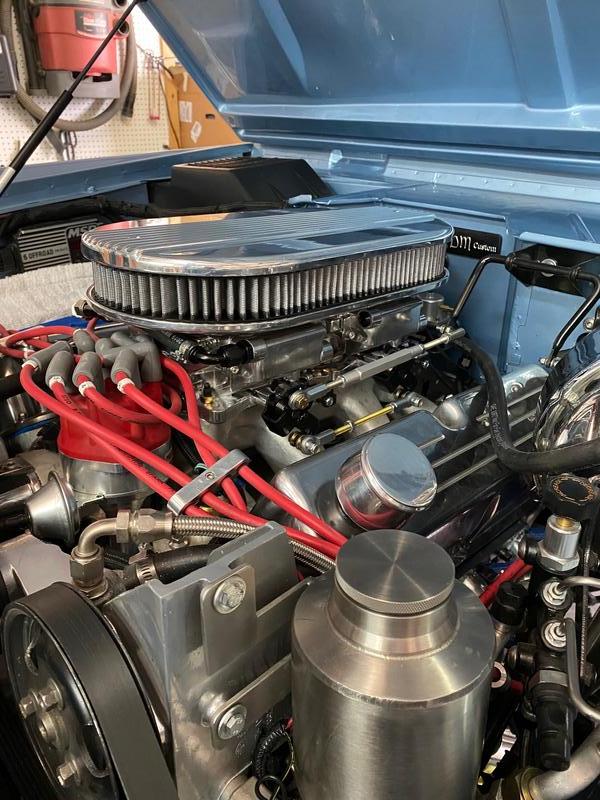 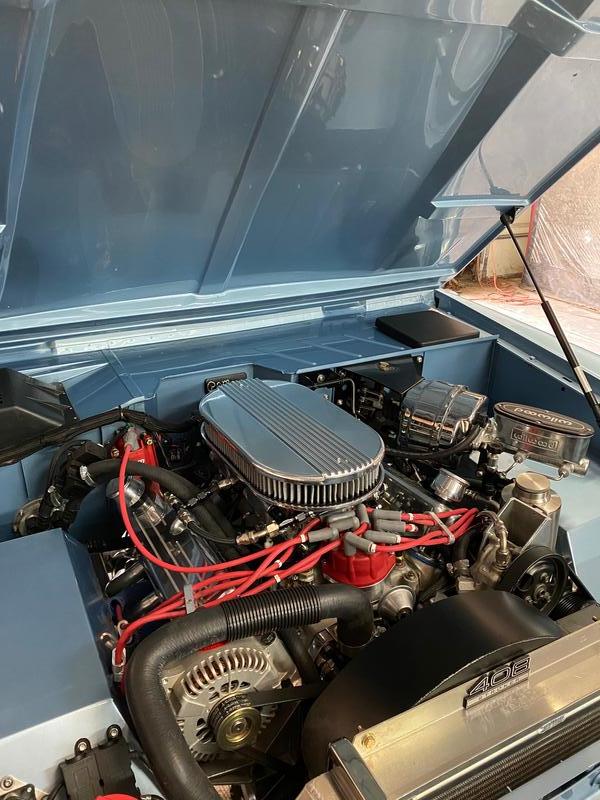 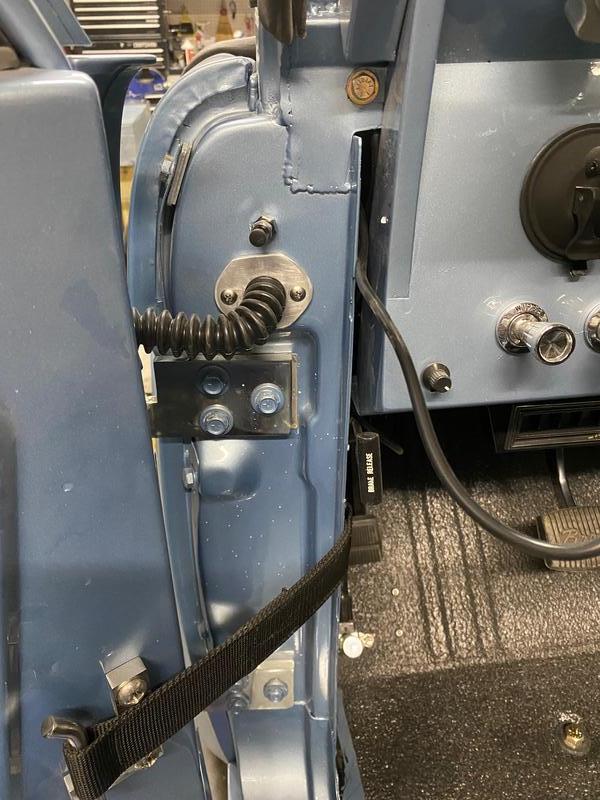 the sniper pad will not be staying there permanently. I ordered a speedhut fuel pressure gauge to match my other gauges and it will be going there eventually. the handheld will be mounted in the glove box with a quick release mounting bracket that shoud make it look good and be functional when I no longer need it on a regular basis.

after a major SNAFU the Bronco is back up and running. It's an embarrassing story, but the short version is that the Blueprint engines 408 stroker I ordered from Summit had been replaced with an upgraded version. it comes with about 50 more hp, which is awesome, but it also is internally balanced, and the engine I thought I bought was 28 oz externally balanced. so no surprise there was a nasty vibration, and that explains the rear main seal leak. When I was sending in my tech sheet to Adam Nick Langen from mad scientist tuning to help me tune the Sniper system I discovered my mistake. fortunately I had barely run the engine, so no major damage was done I don't believe, anyway I swapped out the balancer and flywheel and a few other minor things and with the help of my awesome neighbor) I have it all back together. and running. it is much better. I still have an occasional backfire when decelerating, but for my first test drive tonight it was pretty good. I will drive it some more tomorrow to let the fitech learn, then I will make a data log and send it over to Mad Science tuning to get the tune dialed in. on another note, I called toms bronco parts to check on my roll bar, and it is a good thing I did. apparently someone had pulled the order and billed me but the order was never completed. it should be here next week. just in time. I wasn't ready for it before now anyway. now to clean up this mess of a shop and prepare for the next phase of Bronco resurrection
Last edited: Saturday at 1:05 AM

took my daughter to lunch in the bronco today. a bit chilly with no top. the roll bar should be here wednesday. then some fitting, painting, installing, then I can maybe put the top on it. I have been vacillating on the roll bar. at first I was going to have it powdercoated, the upside to powdercoating is that it is very durable, the downside is that if you scratch it, it is extremely difficult to fix, you can't just touch it up. paint is less durable but easy to touch up if damaged, so I decided to go with rustoleum hammered black paint. as I am sure you guys know the hammered paint gives a textured, weathered look that looks even better if you get a little crazy and put it on too heavy and get runs or splotches it is also very durable and you can paint right over rust with it. So I think it will be perfect for the roll bar.