Sorry to hear about your Dad.

oldognewtrick said:
I think the bead roller will be a lot more useful than the slot cars.... But that's just me. And once again, congrats on being selected and thanks for sharing your build thread!
Click to expand...

for some reason I can't explain, yesterday I got a package with the slot car racetrack. so I guess the bead roller is a super cool bonus. I got it assembled last night, but I have not had a chance to try it out yet.

Well, who knows what FedEx will bring tomorrow... Nice score.

Now you won't have any Bronco progress from playing with the slot cars. I can see it now, cleaning out the shop and building a 1000' race track.

well, I am sad to report that my Dad, my number one helper and chief advisor passed away yesterday.

Ah man, I am truly sorry to hear this. My condolences to you and your family!

So sorry to hear about your dad. Thoughts and prayers for you and your family.

Very sorry to hear, my condolences to you and your family.

Barrie is lost again, will someone call the nurse?

Chris said:
Barrie is lost again, will someone call the nurse?
Click to expand...

Chris said:
Barrie is lost again, will someone call the nurse?
Click to expand...

Come on now at least I remembered to check in. LOL.

sorry all, I haven't really felt like working on the bronco much lately. and right now I am just saving up money for the paint work. once I get it painted, probably early next spring then progress will start up again, but it takes a lot of money to get a quality paint job even when the body is completely straight and rust free. so I don't expect to have much to report for a while. thanks for checking in.

We totally understand, a lot of us have been where you are. Sometimes, it just take time. I lost my dad in 1988, I still to today wish I could call him and ask his advise on what I'm trying to mess up. When you're ready, we'd love to have an update. Keeping you and yours in our thoughts and prayers.

here is a brief update to what little I have gotten done recently. I had to have shoulder surgery in september. my ac joint had to be reconstructed so I was supposed to not use it too much. unfortunately I am a much better doctor than I am patient. and since I had a whole week off I couldn't just sit around so i bought a new quick ratio steering gearbox from toms bronco parts. that was a bit of a challenge to get in place and bolted up with a bum shoulder, but I got it. then I needed to figure out the hoses. so I tried to bolt the ac compressor in place, but I couldn't get the bolts in because of the inner fenderwell. so I drilled some holes in the fender well and plugged them with rubber body plugs 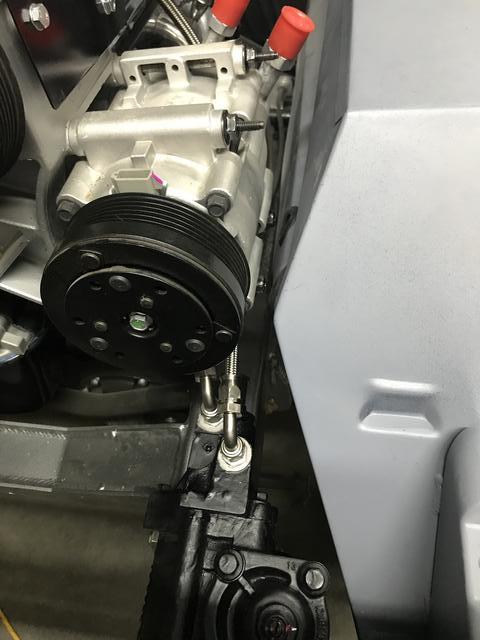 then I want to use a stock style steel hood, and figuring out how to mount the remote reservoir for the pump proved to be a pretty difficult prospect. there is a brace in the hood that runs right where the reservoir needs to go. some people who have used this system have been able to relocate it just a little bit and make it fit. but with a 351 and using the ac compressor I was unable to make it work no matter what I tried. so I decided to relocate it back a bit. I bought a moroso reservoir from summit and fabbed up a bracket to make it work, and then plumbed up some russell PTFE lined powerflex hoses. I am not really happy having to relocate it so far back, but it looks like it is going to clear everything and I don't think it looks too bad. 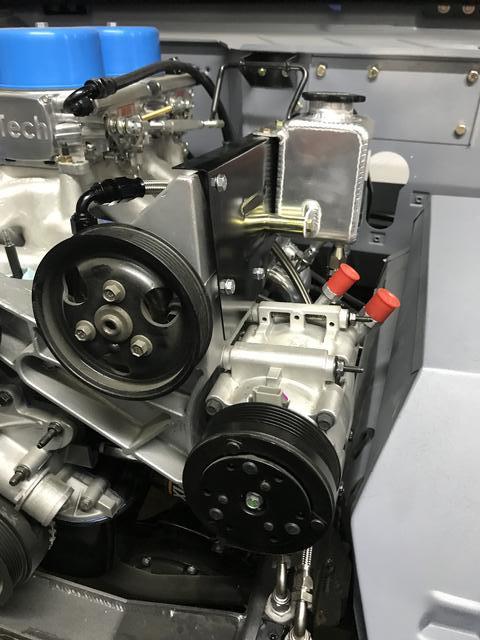 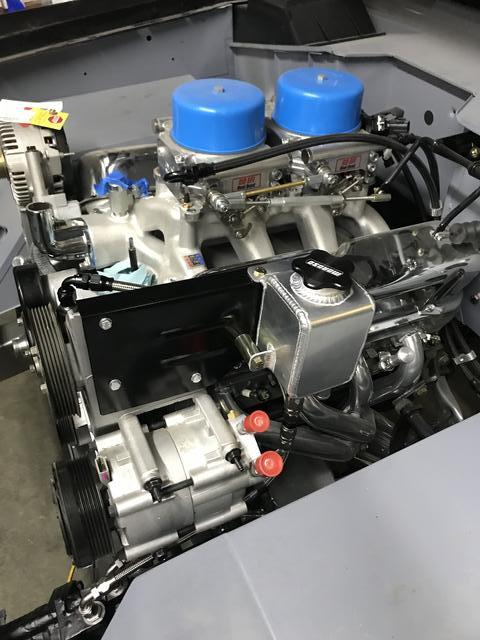 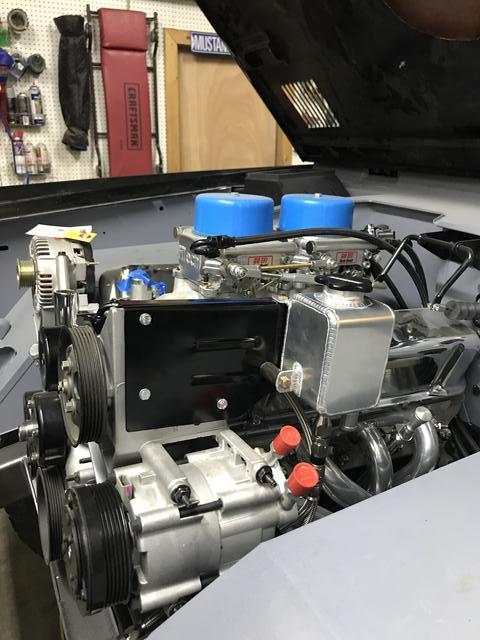 I ordered a return line with a tight 90 degree molded bend in it and as soon as that gets In I can finish up the lines. then I need to figure out what I am going to do about the ac lines.

then came another change in plans. I had planned to keep the old tires and wheels on the bronco at least until after it was painted. however last night I was sitting in the garage with my earbuds in playing a computer game when I heard this loud crash. It about scared the crap out of Josh lol I thought it was thunder at first. anyway i got up to go in the house a little while later and saw this. I had a couple choices at that point. those wheels are all rusted and not the style I want to go with so I had always planned to get new wheels and tires. these are 15 inch wheels and finding 15 inch wheels in a style I liked proved to be impossible so I decided to go with a 17 inch wheel. so I had to either try to buy a 15 inch tire roughly the right size just to get me through the paint process, or buy my new wheels and tires a bit earlier than planned. I have a spare tire that looks like crap and will probably not support the weight of the truck for long and I could not find a used tire anywhere in town so I bit the bullet and ordered new wheels and tires today. they won't be here for a while, but then I can finally see what the final look of the vehicle is going to be. I ordered a set of 17 x 9 method race wheels with some 33 12.50 17 tires. that should be a good look when they are installed. of course I still don't know how much it is going to cost to paint the vehicle. ( I am patiently waiting to hear from the body shop), ok as patiently as I get anyway. but this may delay when I can get it painted. so we will have to see. 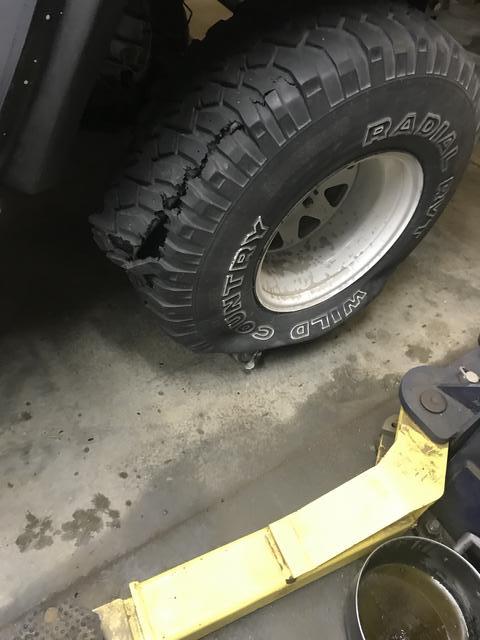 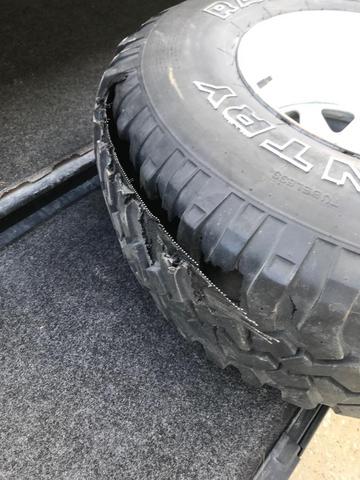 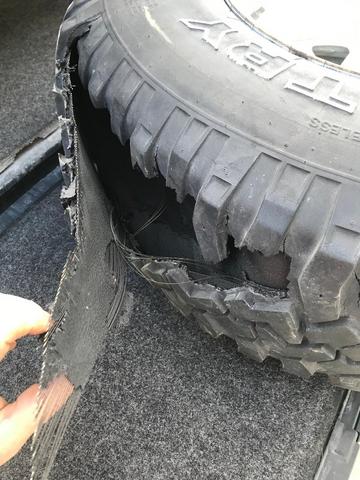 What color are you thinking of?

oldognewtrick said:
What color are you thinking of?
Click to expand...

I am thinking Brittany blue. it will ultimately look a lot like this one.